Pic of the Week. 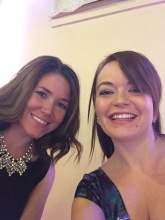 Me & Sheena with the groom! 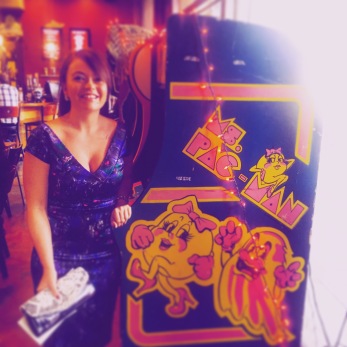 It’s quite possible I’m still coming off a high from such an incredible weekend.

I took my first paid-vacation day at the new job on Friday to travel to Kansas City, Missouri. A little random? Kind of.

My reasoning was, I got invited to a wedding there. The groom has been a longtime blog reader, turned friend, but we’d never met in-person. What better way to meet someone than on the day of his wedding?

And so, I packed my Jeep and drove. I invited my friend Sheena to be my plus-one, so she did the same, only she was coming from Indiana, and I from Texas.

I’ve been traveling and driving a lot lately, but I waited too late to get a flight, so I hit the road. And honestly? I’m really glad I did. It was one of the most beautiful drives I’ve ever taken.

Most of the route was on I-35, stretching over miles of fields, wind farms, and cows. I even saw an old pickup racing down a dusty trail. It was completely glorious and I felt like I was in a Nicholas Sparks’ book for a few hours.

And at the end of the long, long road, was one of my best friends. We enjoyed wine and food and caught up on our first night in town.

Saturday, we had to taste what Kansas City was famous for: the BBQ. It was sweet and sticky, and insanely delicious. If you ever find yourself in KC, stop by the Smoke Box, order the beans, and eat all of the hunks of meat in them. They’ve been simmering in that damn pot since before you were born and it is melty, meaty goodness.

And then, it was nearly time for the wedding! I’d be lying if I said I wasn’t anxious all day for it.

You see, the blog reader, my friend, the groom, Matt, is also a blogger. That’s how we connected. While I’ve been sitting over here getting off on cynicism, Matt created a blog following on being a “Nice Guy.” He was on a mission to prove that being a nice guy really puts you in the winner’s circle.

After a few years of reading each other’s blogs and exchanging writings, we traded numbers, and in what was probably one of the lowest parts of my life: I reached out for his advice.

I was about two months into my relationship with D. He was drinking every night and we were fighting. “Is this normal?” I texted Matt.

Of course, it wasn’t. And he told me to move on. But, I figured Matt just didn’t know me. Turns out, I should’ve taken his advice, as what followed was enough drama that created my first book: How I Fell.

About that same time, Matt setup to meet a girl he’d been talking to via an online dating site. They met in-person at a dog park, where Matt debuted the love of his life, O’Malley, his rescue dog.

Matt told me the girl, Becca, brought a ball for “Mals,” and that was a major point-score. They saw each other again and again, and they even started dating.

And I? I was dating a jerk and rolled my eyes at Matt and Becca’s smooth sailing. Something had to be less than perfect, right? No.

Matt told me many months later that he was planning to propose to Becca during their vacation trip to Los Angeles.

I was so, so happy and I kept texting Matt, “Has it happened yet?!”

It did. She said yes. And there we we were, about to see the whole thing through.

Matt and Becca got married at an old, yet still-functional, movie theatre in Kansas City. Their names were on the marquee, there was popcorn, arcade games, and traditional theatre seating. There was even a little preview: the Mupetts. Because… Of course.

While the attire was semi formal and the bride and groom were completely decked, the bouquets were made from paper (some of the flowers were made of comics) and they were wearing chucks (I completely called this).

It was so personalized and unique; I absolutely loved it!

I know every wedding is full of love, but I’ll be honest, sometimes there’s so many flowers, and crystals, and people that it’s hard to see it. This was the first time I’ve been to a wedding and could honestly see just how much every single person wanted the bride and groom to be together.

There were lots of happy tears, well-wishes, and congratulations. Everyone was so thankful that these two, who were clearly made for each other, had finally found each other. It was very sweet.

Aside from getting to meet Matt and Becca, there were also a few other blog fans there and it was flattering and humbling and just so fun all at once!

I started my blog (and many others) because I’m always writing and thinking and analyzing. Never did I ever think that one, or two, or from what WordPress tells me, hundreds of people across this globe would read my words, or care about my life.

But there I was, in Kansas City, toasting to two of my very own. To Matt and Becca, I cannot imagine that in my years of blogging (read:over sharing), I’ve given you what you gave me in a single weekend.

You gave me hope that no matter how you meet someone, and even if you’ve got some weird obsessions (ahem, Halloween), there’s still a possibility that a match is out there. More importantly, you proved what I’ve always wondered: that fate is real.

And to that, I say congratulations and thank you!

To the rest of you, take a lesson from Matt and Becca: invite me to your wedding. I will bring gifts but I’ll drink you dry.