Podcasts I’ve been listening to.

I’ll be honest with you, I thought the podcast was dead. Remember when they first came out? If not, it was 2004, and McDonald’s (yummm) was the first to utter the word via print publication (The Guardian newspaper). Podcasts debuted in conjunction with iPods, because people were using their iPods to listen to and create podcasts. According to iTunes, there are more than 250,000 unique podcasts with more than 8 million episodes (just in the iTunes store).

Over the years, I’ve heard about people listening to this podcast or that one, but I never understood when people had time to listen to these podcasts? In their car? I have XM, so that’s not happening.

But, now that I work in an open office environment, I get it. There is absolutely no way I can concentrate with all of the chaos that happens in my office. There’s meetings, phone conferences, and that noise I’ve grown to hate: the click-clacking of a keyboard. Not a laptop keyboard; you know the ones with the tall, fat keys? I. Hate. That. Noise. Especially when the space bar is slammed down. Errgghhhhh.

So, headphones it is. At first, I listened to the same exact podcast for 8 hours a day. But that quickly got old, so I ventured out to find suitable listening content. And here is what I found: 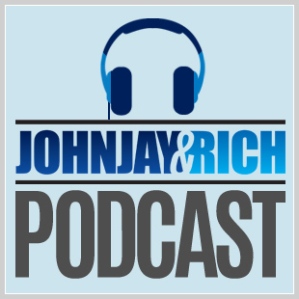 The Johnjay and Rich Show – This “podcast” is the exact same content from the Johnjay and Rich radio show, but all of the music and commercials are cut out so you just get the “straight poop” as the guys say. If you haven’t listened to them yet, you need to get on it, TODAY.

Every day they have at least one phone call bust of some sort, whether it be dating-related, calling out a coworker, or this week, they’re starting their “Spring Break Busts”. You also get the quick scoop on celebrity gossip from host #3, Kyle, and a slew of other random bits, including but not limited to “I knew it was over when…” (the moment you knew a relationship was over), “First World Problems”, and “Things I’ll never do again after this weekend…”.

The Jillian Michaels’ Show – I really never understood the craze around Jillian Michaels when she was a trainer on “The Biggest Loser”, as I never watched the show. But, somehow I recently became addicted to her show on E!, “Just Jillian” and she’s blunt and bitchy (much like my kitty Blanche) and I completely love it. So, I looked into her podcast after seeing her record an episode on the TV show.

The podcast is about half fitness and dieting, half other stuff, such as resolving life’s issues, bullying in schools, relationship problems, and politics. It’s casual, and usually pretty funny.

What Should I Read Next? with Anne Bogel

I’ll be honest, I’m not 100% sure who Anne Bogel is. I came across this podcast after I’d listened to all of the Johnjay and Rich archives, as well as The Jillian Michaels’ archives. I was in desperate need for something new to listen to, and this one was listed in the “Top Charts” of iTunes for podcasts.

I pretty much instantly fell in love with this podcast. Each episode features one guest, who tells Anne about three of their favorite books (and why), along with one book they hate, and why. They also discuss if there’s anything they want to “change in their reading life”. Based off all of this information, Anne gives them three title recommendations for what they should read next – it’s a great way to get book ideas!

Anyway, the podcast features a celebrity reading one of the columns, and then they talk to the person that wrote the column, and get the backstory, and/or catch up on things that have happened since the column was published. It’s a mellow, and very interesting podcast.

Manrepeller: Oh Boy – Manrepeller has remained one of my favorite blogs for the last five years or so; and I was excited when she, Leandra Medine, the founder of Manrepeller, announced they were going to start hosting podcasts.

The host, Jay, sits down with fairly well-known celebs and entrepreneurs, and his interviews are usually interesting as hell, since they are casual and nothing is off the table. Past guests of Oh Boy include Amy Odell, Stacy London, Whitney Cummings, and Alexa Chung, among many others.

Manrepeller: Monocycle – From the same, fabulous blog, Leandra Medine brings us Monocycle, which is just her, and it’s typically about 10-20 minutes long. That’s it. It really is just Leandra and she’s musing about something on her mind, and I’m not sure why, but I absolutely love it. Possibly because she thinks about things that don’t often cross my mind, and she has a nice voice.

Got podcasts you love to listen to? I’d love to get more ideas – after all, I’ve got 8 hours a day to kill in terms of listening, so bring it on!