Pic of the Week.

Hobby Lobby has officially dumped the contents of its shelves into my apartment — and it is a beautiful, sparkly mess — which, is actually really exciting for my kitty, Blanche.

After that crappy week I told you all about, I was really excited to get involved in a good craft project.

Every year, one of my best girlfriends and her boyfriend compete in a Gumbo Cook-off. Three years ago, they asked me if I wanted to join their team. Let’s see, tons of Southern food, gumbo, beer, and people-watching? HELLS YES.

So now, it has become an October tradition to pack up our cars, drive an hour away, and spend the weekend cooking (and eating) delicious food. It’s something I look forward to every year.

While our team is smaller than most of the teams we’re competing against, we’ve stepped up our game these last few years — selling out of gumbo, sporting matching shirts and aprons, and this year, I volunteered to decorate our booth!

Every year, the Gumbo Cook-off has a theme. In previous years, it’s been things like “America the Beautiful,” or “Choot ‘Em” (Swamp People). This year, the theme is “25th Anniversary.”

Umm, because of course the year that I decide to decorate, they would have the theme be something un-fun, and really freaking difficult to figure out.

At first, I was just thinking I could have silver decorations (since 25 is year of silver). And then I decided that was lame and boring. Then I was just thinking about gumbo itself — chicken, sausage, bell peppers, onions, etc. I was imagining strands of faux veggie garland.

But… turns out, plastic veggies are super expensive. So, fail.

Over brunch, one of my guy friends suggested a play on words: Twenty Fifths…as in, 20 bottles of alcohol.

At first, I wasn’t sold. But once I got to Hobby Lobby, I went down every aisle and starting seeing some different options where I could make the “20 fifths” thing work.

It took me all week, but I made: 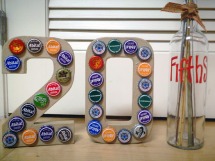 Table Banner — “Cheers to 20 Fifths” using the scrapbook paper. I used 20 sheets of scrapbook paper, traced bottles of Jack Daniels and wine on them, painted the bottles black, and trimmed the paper into equal rectangles. Then, I used the twine and tiny clothespins to make it a hangable banner.

Table Decor — Hobby Lobby had these giant cardboard-ish numbers, so I bought a 2-0, and then a large glass wine bottle, which I painted “5ths” on it, and filled it with faux hay and glittery, silver sticks (to signify 25). To add a little something extra, I found a stockpile of beer bottle caps, which I glued to the numbers. Finally, a use for the things I hoard!

Cocktail Garland — I used the small, red Solo cups, along with the tiny, plastic martini glasses to create a cocktail garland (using the twine). Holes were poked into the cups and strung, then I used hot glue to secure it (I didn’t want the cups to move). I hot glued the twine to the martini glasses, so the garland would be Solo cup-tini-cup-tini, etc. To add some detail, I hot glued toothpicks with tiny faux olives on them (I made these) into the glasses.

Tent decor — I used the mason jars to fill with faux hay, glittery silver sticks, and other flowers, along with wine corks. I know this doesn’t have a direct relation to our “drinking” theme, but I really just wanted something that would decorate the sides (the legs) of our tent, and I couldn’t think of anything that would really catch people’s eyes.

While I’m not sure if we will be in the running to win the decorations-portion of the competition, I think people will at least appreciate our love for booze. If you’re indoors crafting this week, good luck! Make something beautiful.