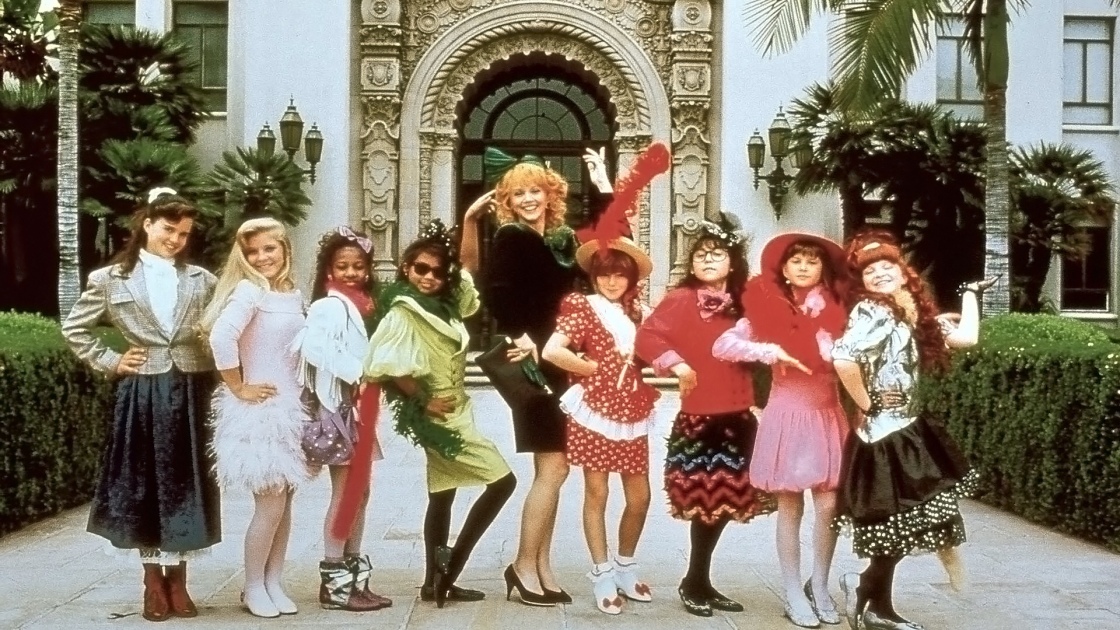 I did some Googling and discovered it came out in 1989 (I was 4) and here’s the rest of the scoop:

With her marriage breaking up, Beverly Hills housewife Phyllis Nefler (Shelley Long) boosts her self-esteem by leading a local troop of Wilderness Girls. Although Phyllis’ version of roughing it is spending the night at the Beverly Hills Hotel, that suits her privileged troop members just fine.

Unfortunately, when Phyllis falls afoul of a rival leader, the girls are threatened with having their group dissolved — unless they can prove their wilderness skills at the annual jamboree.

Honestly, I love any movie that shows us now-retro Beverly Hills, like “Clueless” and “Pretty Woman” so I had a feeling I was going to like this one. The first thing I noticed about this movie is that there’s a ton of famous actors in it!

There’s Shelley Long (I recognize her most from “The Brady Bunch” movies), Tori Spelling (“Scary Movie 2″… no, I didn’t watch 90210), Shelley Morrison (she played Rosario in “Will & Grace”), Heather Hopper (she was Nikki in “Good Morning, Miss Bliss”) and Willie Garson (Stanford in “Sex & The City”).

I’m sure there were more I didn’t recognize. Anyway, once Phyllis agrees to lead the troop, their first attempt at outdoors life is a disaster when it starts to rain. The girls check into the Beverly Hills Hotel and immediately, the troop master is not pleased.

But, Phyllis doesn’t seem to mind. However, when all of the troops meet up, it becomes obvious that the other girls have earned several patches for all of their accomplishments, like building a campfire, sewing and cooking. The girls in troop Beverly Hills wish they had patches, too.

So, Phyllis creates opportunities for the girls to earn patches based on real life skills, such as jewelry appraisal, dancing (learning the mashed potato and the twist) and divorce court, when it’s revealed that Phyllis’ recent ex has decided to remarry.

Nevertheless, the girls earn patches quickly and sell loads of cookies. Toward the end of the movie, they really do have it rough it outdoors, but make out just fine.

In the end, this was such a funny movie, and although some of the stereotypes are a little cringe-worthy, I like that Phyllis’ character stood up for what she believed in and wasn’t portrayed as a dumb housewife.

Plus, I do think a lot of those skills come in handy more than the traditional troop skills would…

After watching it, I immediately purchased a Troop Beverly Hills sweatshirt to commemorate this occasion 🙂

For more movie recommendations, be sure to subscribe to the blog (look to the right) and follow me on Instagram @Orangejulius7 – where I share more of my daily life. Need help with your blog? I can help with all of your digital marketing efforts – just let me know!