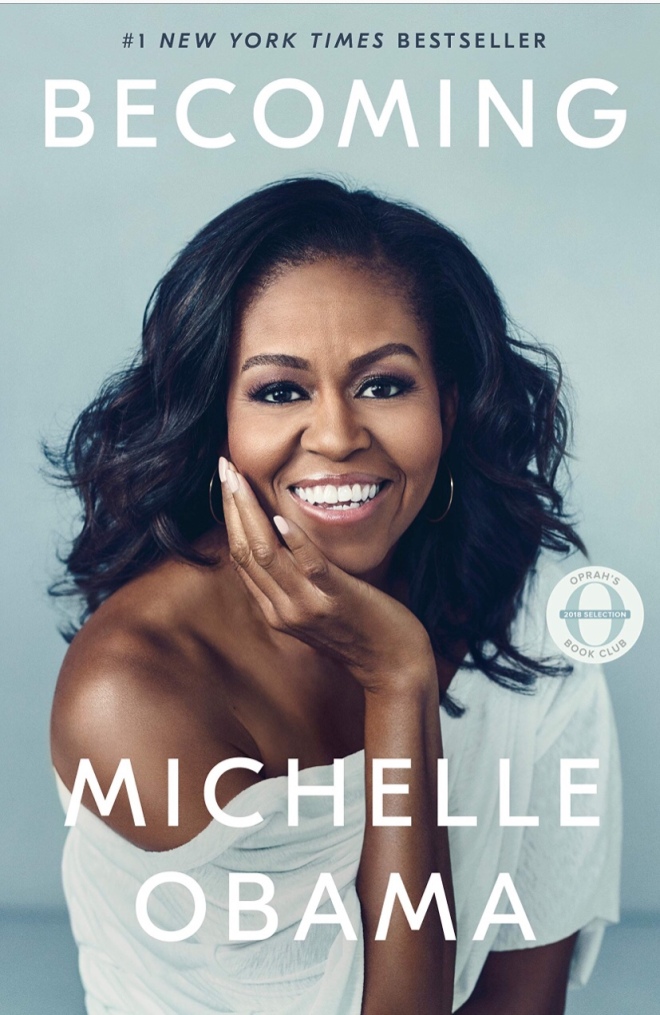 I don’t know what is in the air (I think it’s oak pollen) but I’ve been up since 3 sneezing and putting eye drops in my itchy, red eyes! Around 4:30, I gave up and made coffee. I started on new allergy meds last week and have been feeling pretty good until this morning.

I was outside quite a bit on Saturday and I took a 3-mile walk last night… now I feel like there’s likely loads of pollen in any crevice of my body that I missed during my post-walk shower. Ugh.

But today’s post is much more positive — I’m talking about the latest read from Blanche’s Book Club: “Becoming” by Michelle Obama. Here is the book’s description from the book’s website:

IN A LIFE filled with meaning and accomplishment, Michelle Obama has emerged as one of the most iconic and compelling women of our era. As First Lady of the United States of America—the first African American to serve in that role—she helped create the most welcoming and inclusive White House in history, while also establishing herself as a powerful advocate for women and girls in the U.S. and around the world, dramatically changing the ways that families pursue healthier and more active lives, and standing with her husband as he led America through some of its most harrowing moments. Along the way, she showed us a few dance moves, crushed Carpool Karaoke, and raised two down-to-earth daughters under an unforgiving media glare.

In her memoir, a work of deep reflection and mesmerizing storytelling, Michelle Obama invites readers into her world, chronicling the experiences that have shaped her—from her childhood on the South Side of Chicago to her years as an executive balancing the demands of motherhood and work, to her time spent at the world’s most famous address. With unerring honesty and lively wit, she describes her triumphs and her disappointments, both public and private, telling her full story as she has lived it—in her own words and on her own terms. Warm, wise, and revelatory, Becoming is the deeply personal reckoning of a woman of soul and substance who has steadily defied expectations—and whose story inspires us to do the same.

As soon as this book came out, I saw great reviews on it, so I added it to my list of library reserves (the waitlist was long). Honestly, I’ve never had much thought about Michelle Obama, and that likely sounds meaner than I intend.

I definitely thought she seemed cool, I liked that she wore lesser-known designers and affordable clothes during her time as First Lady, and I admired her garden at the White House and the coordinated effort to solve problems at the root of childhood obesity.

But I never really wondered about her politics or what she thought of her husband as President or what she was like as a mom. But this book works to tell all of those stories and I was pleasantly surprised.

It walks through her childhood, her relationship with her family, how she met Barack, their wedding, and having kids… and of course, her husband’s journey to the White House. I read nearly all of it in one sitting.

Even though I’ve read other books by former First Ladies, this was definitely the closest, likely the most real, picture I’ve ever had of what life is like inside the White House — it was fascinating.

I’d definitely recommend this book if you have any interest in an inside look of the presidency and/or life of a First Lady.

The next book Blanche’s Book Club will be Reading is “The Library Book” by Susan Orlean — I think this is my first read from Reese Witherspoon’s book club!

Meanwhile, I’m going to go scrub my hair because there are likely pollen spores clinging in there somewhere. Send help!

I read some really great books by Black authors in February 😍 I got an insider’s view of the American Presidency, read about the power and influence of Malcom X, & got the backstory on Maverick Carter (if you know, you know) 🖤 I added Black authors to my TBR list for the entire year. The more I learn, the more I want to know. What books did you read last month? #blackhistorymonth #februaryreads #blanchesbookclub #blackauthors #apromisedland
Things still aren’t quite right post-freeze & honestly, I’ve hit a wall with pandemic life 😖 I know this feeling will pass, and before I know it, I’ll be writing another book & spinning in my desk chair 🤓 But it’s Friday & I’ve got sparkling wine so cheers, even if I’m cheersing to my laundry piles 🥂🥐 #friyay #cheers #finkeswine #atxfood
SO many local businesses have been helping the community after a tough week & I’m going to do my part by supporting them ❤️ I’m starting with @garboslobster — got the grilled cheese 🧀 What places are you going to support? Where should I eat next?? 😋 #atx #atxfood #garboslobster #grilledcheese #grilledcheeseplease #tomatosoup #texasfreeze
Leeeetttt the sun SHIIIINE 🌞 The snow is gone & I was able to move ALL of my plant babies from their hiding places (from Blanche) on the tops of my kitchen cabinets back to the patio 🌿 They seemed to have survived, but they need sun and fresh air... I think we all do 💗 #atx #atxwinter #patiodecor #greenthumb #aptlife #catio #pottedplants #texasfreeze
It takes a lot to survive right now. This was a reminder I told myself last year when I was trying to figure out pandemic life. Now, throw a snowstorm and no running water on top of it ❄️ This is my busiest week of work this year, and I’m spending my lunch breaks scooping snow for a water supply and stuffing pillows into my windows to trap heat. I’m thankful for the electricity I have to stay warm, thankful for internet to meet deadlines, thankful for clean clothes and wool socks. But wow, I’m exhausted. 💙 #texasfreeze #atxwinter #atxfreeze2021 #freelancer #balancingact #woolsocks
Blanche took her first steps in the snow 🐱🐾 #ATX weather #snowday #pawprints #kitty #sneaux #snowpocalypse
Snowwww dayyyyy ❄️🥶 #atxweather #texasfreeze #icestorm #uggboots #bundledup
Me & Blanche, debating on who gets the unicorn blanket 🦄 It’s snowing outside, which means I had every reason to wear my cashmere + wool set from @summersalt — details on Thebitterlemon.com today! ❤️ #linkinbio #thebitterlemon #atxwinter #snowday #texasfreeze #crueltyfreefashion #summersalt
My barrel cactus needs a warm blanket & a hot toddy ❄️ #atxwinter #cactus #texasweather #bbrrr
Happy Pub Day to me! 🤓 I never thought I’d share this, but my mind created a small town with a cool truck stop and a tattoo artist with big dreams 💜 All of the details are on the blog today & I’m already looking forward to #nanowrimo 2021! Thank you for all of your kind messages + support #linkinbio #thebitterlemon #selfpublishedauthor #firstnovel #selfpublished
It’s official: we’ve been in quarantine way too long 🤣 Remember when I wrote my first novel in the Q? Well, it comes out Tuesday & I’m sharing all sorts of details about the plot, how I wrote it, etc. on Thebitterlemon.com today 🤓 Cheers to furry writing buddies! #linkinbio #thebitterlemon #nanowrimo2020 #selfpublished #firstnovel #calicocat
I got my first dose of the Moderna COVID-19 vaccine Monday 💉After a bit of a rough 24 hours of side effects, I’m sharing my entire experience on Thebitterlemon.com 💙 I continue to be grateful for my health & for those on the frontlines, working to help us tackle this virus #linkinbio #thebitterlemon #vaccine #covidvacccine #quarantinelife #tiedyeshirt