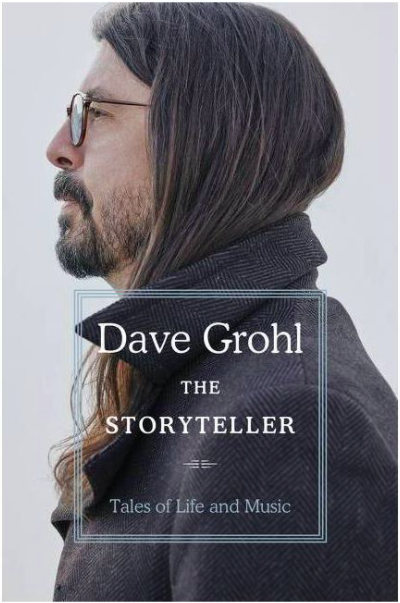 I feel like I’m so far behind on my reading this month and I hate that feeling! But, I’m pumped to share this latest read with you because it was a VERY unexpected gem.

It’s “The Storyteller: Tales of Life and Music” by Dave Grohl — and just to note, I listened to the audiobook, which is read by the author.

I completely stumbled across this one! I was looking on the Libby app for new audiobooks (one of my favorite things to do when I have a spare couple of minutes), and saw it.

I wasn’t sold at first, but I looked it up on GoodReads and it had such good reviews. Many people said it was a must-read if you were a fan of music, and well, I am.

I really only knew Dave Grohl from the Foo Fighters, whom I have seen in concert, but they are not a band I regularly keep in my rotation.

Despite knowing virtually nothing about him, though, I went ahead and checked out the book and started listening.

I’m not sure if I can properly explain what a freakin TREAT this book is!

For starters, Grohl has a very charming and funny way of telling stories, which explains the title of the book (I wasn’t sold at first). But, he also has lived an interesting life, full of adventures.

He talks a lot about his time as the drummer for Nirvana, which, for as much as I know about Kurt Cobain, I felt shocked to learn that Grohl played for Nirvana (*palm to the face).

He shares thoughts on Cobain as a friend, as a musician, and then talks a lot about how he felt when Cobain passed.

There are several stories about Nirvana performances, including their iconic visit to SNL, and a world tour. Plus, he shares details about the turning point in their career: the “Smells Like Teen Spirit” music video premiere.

Some unexpected things I heard in this book were Grohl’s experiences with money (specifically, the transition from coming from nothing to being wealthy), being starstruck meeting celebrities and music idols, and dealing with grief.

He also told some very sweet stories about his family, especially his two daughters.

I was so entertained by this book, I didn’t want it to end! I loved the variety of stories, how they were written and told, and it was so refreshing to hear “insider” stories that felt like conversations with an old friend.

This is my second 5-star read of the year, and it was an easy rating to deliver. I would definitely recommend this to any music fan, and if you can, go for the audio version!

For more book recommendations, be sure to subscribe to the blog (look to the right) and follow me on Goodreads @thebitterlemon – where I share more of my book picks. Also, check out my printable bookmarks and Book Club Journal Pages in my Etsy Shop.