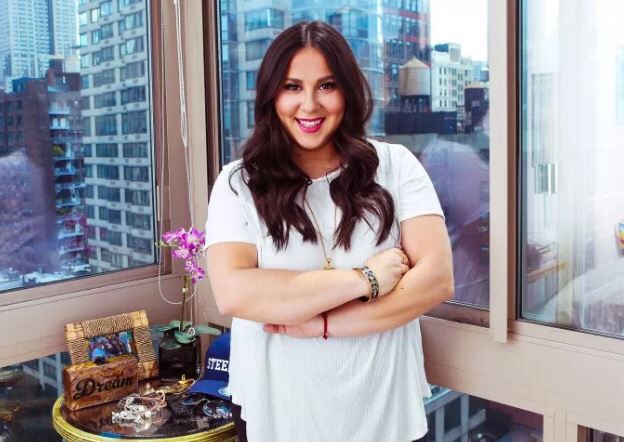 I saw Claudia Oshry on her Dirty Jeans Tour!

Last night, I got to see Claudia Oshry at the Paramount Theatre as part of her Dirty Jeans Tour!

I started following Claudia on Instagram @girlwithnojob about two years ago. To be honest, I’m not auite sure how I stumbled upon her, but her account is hilarious — mostly memes and screenshots, but I’m all about supporting anything online that makes me laugh.

I started noticing her mention her show, “The Morning Toast”, which airs live Monday-Friday on YouTube, but is also available as a podcast. I’m much more of a podcast listener, so I added to it my running list of podcasts I wanted to check out.

Finally, at the beginning of this year, I started listening. It’s a show that covers news and pop culture, so I decided to jump right in and not start from the beginning. So far, that’s been working for me and I absolutely LOVE listening to the show every day.

Claudia hosts the show with her sister, Jackie, and their sister, Margo is also a part of the show. All three of the ladies are fun and hilarious, and the show is just funny with positive vibes. It’s a breath of fresh air!

So, when I saw her Dirty Jeans Tour was stopping in Austin, I bought a ticket as soon as they went on sale. I wasn’t entirely sure what the show would be like — sure, she’s funny on Instagram and on her podcast, but I wasn’t familiar with her standup. I know she’s a big fan of Joan Rivers, so I thought maybe she’d have some of Joan’s influence.

When I got to the Paramount, the audience was exactly what I expected: mostly millennial women, some of whom had brought their guys along. As soon as I sat down in my seat, the couple behind me was arguing about a non-existent situation: if the show was in Dallas, would he go? He swore he wouldn’t, and she said he would. Then, they proceeded to argue about what time to leave the event, because he didn’t want to stay.

I had a similar couple next to me at the John Mayer concert in New York. They were constantly arguing so loud, it was difficult for me to concentrate on the show.

I am fully aware of two things: I go to most things alone, so I’m not distracted by the person/people I’m with, and I’m also making a conscious effort not to drink, so I don’t have the alcohol haze as a buffer.

Once the show started, the couple behind me talked the ENTIRE time, and I kept hearing people around me having to explain the pop culture references Claudia was referring to on stage.

I don’t understand why someone would see Claudia Oshry if they don’t keep up with pop culture/reality TV/Claudia’s Instagram. She’s not a political commentator, she speaks on pop culture and recaps reality TV (mostly on Bravo).

In fact, as soon as she came out on stage, she apologized to all of the straight guys in the audience because they probably wouldn’t know her references. Later in the show, she said she always wonders if she could live in the cities where she stops on tour.

She made a comment about how based on what she pays in rent in New York City, she would be living like a queen in Austin. And someone in the audience yelled out, “FUCK YOU!”

I know I probably sound mean, or like a giant loser, and I get it. I remember my dad used to complain a lot about how annoyed he would get with other people when he saw a movie or went somewhere.

I don’t want to be that person that doesn’t do things just because I think I’ll get annoyed, but… let’s recall when I saw “Hamilton” in Austin a few months ago. The lady behind me was singing the entire time. How is that ok?

My friend said she just thinks people are self-absorbed and not paying attention to the people around them, nor the show/performance. I definitely think this is part of it.

There are times however, that I’ve been to shows and NOT been annoyed — anytime I’ve seen a show on Broadway and specifically, when I saw Anderson Cooper and Andy Cohen in Austin.

So, I don’t know. Is it just me? Maybe I have bad luck or bad karma for all the times I used to drink and maybe I annoyed those around me. Maybe it’s just the certain shows I’m going to? Maybe it’s a sign of the times?

I know I sound like an old, grouchy lady and I apologize for that. But why spend money to see a show if you’re just going to sit and talk through it?

Anyway, I don’t want any of this to take away from Claudia’s show. She was really funny, and she sang a few songs, which was pure delight. I enjoyed all of the personal stories she told, and it just makes me that much more excited to listen to Monday’s episode of “The Morning Toast”!

One thing I really like about Claudia is that she’s funny, but she’s also very strong. She recently shared a story about being cancelled last year, which I knew nothing about (and I was surprised to hear about it). She was able to come back stronger than ever and stand up to someone who was trying to bring her down again and I really appreciate and respect that.

So glad I got to see her show!

To stay updated on The Bitter Lemon, be sure to subscribe to the blog (look to the right) and follow me on Instagram @Orangejulius7– where I share more of my daily life. Live in the Baton Rouge area? I’m teaching a Blogging Boot Camp this September. If you don’t live in Baton Rouge, you can always schedule a Creative Session with me!

I started this week like so many others — with hope that I’d find a gig to help pay my bills. The pandemic cut my monthly income by 80-90% and it’s been an entire year of ups and downs 😫 But I’m ending the week with 3 new gigs. It’s not pre-pandemic cash, but it means I get to have a taste of normalcy, that I get to stay in my apartment, that I get to treat myself 🌟 I know this isn’t over. But I do know that self-talk, manifestations, dreaming, hoping... it’s how I got out of bed every day. Here’s to yet another chapter. Let’s see how this goes! 💖 #manifest #create #dream #thebitterlemon #writer #freelancewriter #armstack #newjob #writingjobs
I got my first pair of non-prescription blue-light blocking glasses from @eyebuydirect 🤓 I’ve purchased 5 pair of glasses from them (prescription, sunglasses) over the years & am sharing it on Thebitterlemon.com today 👩🏻‍💻 I’ve had them for 2 weeks and wear them all the time (I accidentally ran an errand with them yesterday) 👓 Do you wear blue-light blockers? // Style: “Perry” in coral #thebitterlemon #linkinbio #eyebuydirect #bluelightglasses #bluelightblockingglasses #atx #selfie #glassesgirl #glassesfashion
I didn’t think I’d be so emotional seeing and holding this book, but I am 💙 It’s the 5th book I’ve written but my first try at long-form fiction. Not only do I love this story, these characters, this town in the pages, but I learned so much writing this:
Grabbed my Easter candy & hit the road in search of Bluebonnets! 🕵️ Found a few, but I still have more spots to visit this month — they are so pretty 🦋#texasbluebonnets #bluebonnetseason #atx #bluebonnetfield #spring #signsofspring
I got my second dose of the COVID-19 vaccine last week & am counting down the days to freedom 💉 I’m grateful for every person that had a part in creating these vaccines to bring us closer to better days: doctors, scientists, lab workers, researchers, trial participants, everyone 🦠 I did have some gnarly side effects & I’m sharing it all + tips for signing up to get a vaccine on Thebitterlemon.com today 🔬 PS. My mask is from @studiomucci & it’s my favorite one! 💖 #vaxxed💉 #vaccine #vaccinated #atx #covidvacccine #sciencewins
Feeling a bit brighter now that I’ve hung my lemon + magnolia leaf wreath! 🍋 I’ve also updated my Patio Playlist #linkinstory & I’m loving the new bops 🌼 I’m manifesting all sorts of fresh starts this season! #texas #atx #texasspring #diywreath #lemonwreath #springdecor #homedecor #springwreath
Congratulations, Stephanie & Kris! 🤍👰🏻🤵🏻 #zoomwedding #brideandgroom #forever
What a year it’s been 🦠 Some days, it feels like 10 years have gone by and my thoughts of life without masks and social distancing are fuzzy, but then I’ll get a clear memory of a long plane ride, a bowl of ramen at a crowded counter in NYC, or a John Mayer concert and I remember the joys of life that I miss so much 💙 I’m sharing an honest account of my last year in quarantine: the money I lost, what I ate, anxieties, things I did for fun, and how I’ve dealt with the struggle of it all — it’s on Thebitterlemon.com today (strap in, it’s a long one) ☠️ Here’s to hoping the next year brings back all the things we’ve missed #linkinbio #thebitterlemon #pandemic #quarantine #quarantinelife #ayearinquarantine #memories #covidlife
Slow work week = lots of bath bombs, books & vino 🤩 #lushbathbomb #seeingstars #selfcare #hellyeah #relax #bathtime
Happy Birthday, Blanche! 🎈Glitter balloons, bird watching, salmon treats... it’s all of her favorite things today 🎀 Love my fuzzy girl so much! #happybirthday #catbirthdayparty #itsyourbirthday #catlady #glitterballoons
“Life in plastic: it’s fantastic!” 💖 Just coloring my way thru the Q + had a memory... I loved coloring as a kid. When I was 6 or 7, the Rite Aid near my house was having a coloring contest. It was spring, so the picture was an Easter bunny with a big decorated egg. I colored it and my dad turned it in for me and the employees hung it on the wall with all of the other entries 🐰 I ended up winning the contest, but was super sick when it was time to claim my earnings. But my dad and I went to the Rite Aid — I think we got medicine there, too — and I specifically remember the pharmacist handing my dad the prize: a giant blue suitcase filled with crayons 🖍 They were in neat rows in color-order and each crayon had its own slot 🤍 That was a big win #memories #coloring #crayons #barbie #quarantinelife
I read some really great books by Black authors in February 😍 I got an insider’s view of the American Presidency, read about the power and influence of Malcom X, & got the backstory on Maverick Carter (if you know, you know) 🖤 I added Black authors to my TBR list for the entire year. The more I learn, the more I want to know. What books did you read last month? #blackhistorymonth #februaryreads #blanchesbookclub #blackauthors #apromisedland