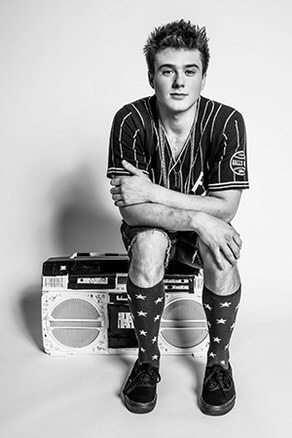 A few days ago, I mentioned that I’ve been watching John Mayer’s Instagram Live talk show, “Current Mood” (which returns 1/27). On the show before the holidays, he had musician Alec Benjamin on as a guest.

He performed two songs on the show: “Annabelle’s Homework” and “Death of Hero” – both catchy enough for me to remember to look him up on Spotify.

…And I haven’t really stopped listening to him since!

From his appearance on the show, I could tell he was young, but you can quickly listen to “1994” and do the math that he’s going to turn 25 this year. Fun fact: that’s how old John Mayer was when he released “Room for Squares”…

“Narrated for You” is his first full-length album, but he’s released several singles and some mixtapes. Other singles include “I Built a Friend” and “End of the Summer”. He also recently rereleased a song with Alesia Cara called, “Let Me Down Slowly”.

Well I, think back every now and then / So I can sit back, and just pretend
That when you call me, I will tell you how I feel
And I never will, I never will, I love you still

He has a unique sound that is a mix of John Mayer (in terms of its chill acoustic sound and witty lyrics), but the vocals remind me of Andrew McMahon (former frontman of Something Corporate), and… If there’s a musician I love just as much as John Mayer, it’s Andrew McMahon!

Alec is hitting the road this year and will even be playing in Austin in April… and it’s already sold out! He did say they are opening up second dates in some cities, so I’m keeping my eyes open.

But, if you’re looking for some good, chill music to listen to, maybe this will be your new favorite artist! I know I have been trying to find things to listen to while I work that won’t distract me, and aside from Alec Benjamin, I’ve been listening to the “This is John Mayer” playlist and it will take you BACK!

If there are songs, artists, or even podcasts that you’re listening to that you think I might like, let me know! I’m always looking for new things to listen to. Happy Tuesday guys 🙂

Join 2,302 other followers
Advertisements
Follow The Bitter Lemon on WordPress.com