The ‘Love Hangover’, no meds needed. 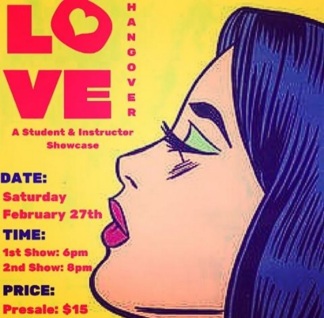 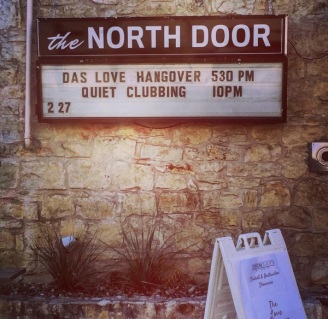 If Saturday was the official “Love Hangover”, then Sunday was a performance hangover. Let me back this train up and explain.

You may or may not recall that I’m making a big effort to step outside of my comfort zone and do more things alone because, well because I don’t know anyone, and I’m not going to know anyone if I sit in my apartment all the time (but don’t worry, I’m not ditching that either).

So, last weekend, I went to a Saturday brunch at my apartment complex. While I currently kind of hate my apartment complex (the parking is terrible and the trash fee is $30/month, but whatever), they do have a pretty robust social calendar, and although I’m not a huge fan of getting to know thy neighbor, you’ve got to start somewhere.

Around the holidays, I went to a gift wrapping party they had and it was pretty fun, so I figured the brunch would be okay. So, I took a little walk to the clubhouse and found that it was a legit, homemade brunch and it was pretty yummy. About 20 residents showed up and I was sitting next to a woman named Linda.

She was older, and we started chatting about where we lived within the complex and which model we had (because what else would we talk about?). While we don’t live near each other, we live in the same apartment style, and she said she’d moved into the apartment, which is a little more than 600 square feet, after downsizing from a 1400 square foot apartment.

Eventually, we got to talking about where we’re from. Turns out, Linda is from New Orleans. We missed each other’s paths by a few years, as she relocated to Austin after Hurricane Katrina. In our short talk, you could tell she misses New Orleans (doesn’t everyone?), and we agreed, no one does brunch like NOLA, baby.

Since she’s lived in Austin for a little over 10 years, I asked her where to eat, where to go, that sort of thing. We also talked a lot about writing, because Linda loves stories and has been journaling since she was a child. But, I’ll be honest with you, as Linda sat and tried to convince herself that she’d go to the gym after brunch, I wondered if I was looking at my future.

Would that be me at 68, living alone, renting a crappy-esque apartment, trying to convince myself to hit the gym on a Saturday afternoon post-free brunch? That’s not meant to be a jab at Linda, or an attempt to say she hasn’t lived an epic life, after all, we only talked for 30 minutes. But it did give me a little kick in the ass.

We had some late night practices, often putting me home at 11pm during the week. Our group, the Video Vixens, were closing the show with, what our instructors called, a huge finale. So we had to BRING IT.

Friday night, show eve, we practiced at the studio until 10, and I went home, showered, and packed my things for the next day. I wanted to get a good night’s sleep.

On Saturday, our tech rehearsal was at 1:45 pm, at the venue, and it was pretty much understood we’d be there until showtime (my performance was around 9:15). So on Saturday morning, I was basically running around like a maniac trying to figure out and pack every single thing I could possibly need for tech rehearsal, the performance, and just in general hanging out for 7 hours pre-performance.

One of my fellow dance girls asked me to lunch,  so we met early (at Flyrite Chicken and it was so fresh and yummy) and got a bite to eat. It was awesome to relax before our busy day, and get to know each other! I joined the dance studio to have an outlet, but also to burn some calories and meet people, so it’s a win!

We headed to the venue close to 1pm, to get parking secured and prep for tech rehearsal. Since I got there early, I got a chance to see some of the other acts that were planned for the night, and I was impressed. During our turn for tech, it was the time to actually practice on stage, and walk through the audience for our entrance.

After that? I spent close to two hours slapping on my stage makeup! I was talking to my mom on the phone while doing this, and laughed, realizing that so much of my cosmetic stash is meant for performing. See, I have this dream of my life being a musical, which is why I love anything glitzy, I love glitter and sequins, and anything over-the-top. So, my Caboodle (yes, a real Caboodle) was packed with false lashes, glitter eyeliner and glitter hairspray, and multiple eye shadow palettes. I love it!

While it has been YEARS since I have performed (high school, senior year, 2003), the day brought back so many of those feelings I had pre-performance as a teenager. Of course I was nervous, but I was excited to show what my group had worked so hard for. I was also really excited to see what the other dancers had in-store. The entire studio, plus a few bonus performers, had all come together to make the entire night a special one.

But there was a huge difference in Saturday night’s performance: there was no one in the audience I knew. In high school, I never wanted my parents to sit within an eye’s view of me, because it would make me nervous. Why? Possibly because the very first time I ever danced for a crowd, I made a small mistake, and my dad sat in the audience and was loudly laughing at me. Go figure.

In a way, knowing no one I knew would see the performance was a load off my back, but of course, I wanted to hold up for my team, and put on the show these people paid for. But, it was painful to check my phone and see that not a single person wished me good luck that night (not counting my mom, because she told me on the phone).

Since I was performing in the second show of the night, I got to relax and watch the entire first show. And, I was blown away. There were great performances by the other group classes, but the instructors also performed, and it was fabulous! There was also a silks dancer and a pole dancer, who really showed out.

The owner of the studio, who choreographed my routine, reminded the audience that Dance Austin is a place for everyone: professional dancers, amateur dancers,  people who’ve been dancers, and people who want to be dancers, no matter the age. She created the studio so everyone could have that outlet, and without completely realizing it, that entire concept is really uplifting, and I’m happy that I somehow found it.

During the intermission of the second show, that’s when we all went backstage to change into our costumes (combat boots, black leggings, sleeveless oxford, cuffs, and a bow tie, complete with a cane) and any final touches to makeup and hair before lining up.

Our group was divided into two: the “chick-n-dales” and the “Magic Michelles”. It was a stripper battle for history. So, the Magic Michelles are on stage, just planning for their next show or whatever, and the Chick-n-dales show up to break up the part, kick them off stage and show them how it’s done. Then the Michelles kick us off, show off a little, and then we both get on the stage and perform together. The audience loved it!

And sure, I wish I had more pictures and video to show you, but it wasn’t allowed, and I was also just trying to stay focused and not be on my phone the whole time. I will keep my eye out for any pictures or videos though, and I’ll post them as I see them.

It was a fantastic night, and I’m really excited to go back to the studio tonight and work toward perfecting my skills for the next showcase in October. Who knows, maybe I’ll try something new next time!

On Friday, one of my coworkers asked me what I was doing over the weekend (because that’s what everyone asks on Friday) and I mentioned the showcase.

“Yes, you’ve got your blog, all of your dance classes… you stay busy,” she said.

Yeah, I guess I do! There are definitely times I feel like all I do is clock hours at work and then be a giant sloth in front of my TV (not saying that’s a bad thing). But, I really do work hard to create a big life for myself – it may not be glamorous, but it’s real, and I’ve got to say, it’s pretty fun!

Join 2,326 other followers
Advertisements
Follow The Bitter Lemon on WordPress.com