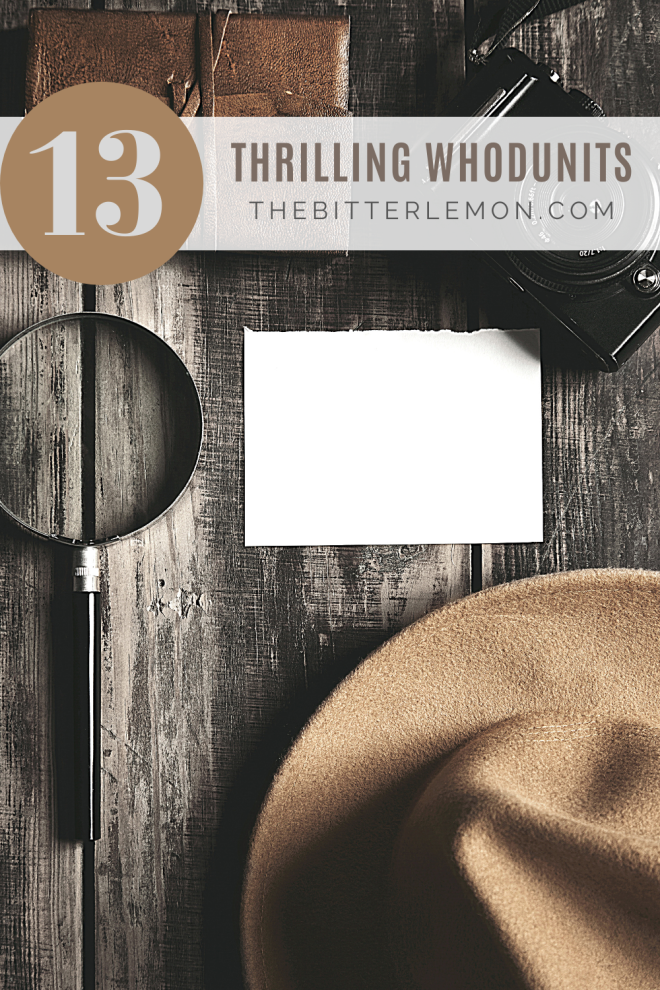 I never really thought I was a fan of whodunits; I have nothing against them, but it’s just not a genre I have been particularly drawn to. Until I read “The Perfect Couple” by Elin Hilderbrand a few weeks ago (you can read my full review here).

It got me thinking, what other whodunits are out there? The answer is… there’s a TON, of course.

But, I sifted through the search results and lists and came up with some titles and some series that look good to me. If you have recommendations, I’d love to hear them.

And PS. I know Agatha Christie is the whodunit master. However, she has written so many books, I have no idea where to begin. If you’ve read anything from her and could lend a tip, I’d very much appreciate it!

Let’s get into it:

‘One of Us is Lying’ by Karen M. McManus

In this teen thriller, a student ends up dead. Which one of his classmates did it? The twist is, while trying to figure out who would want him dead, investigators find a plot the victim created… one that would kill off all the suspects. What!?

I’ll admit, I was kind of surprised to see a whodunit in the teen category, but why not? I love plots that are based at school or on campus.

‘An Unwanted Guest’ by Shari Lapena

The setting is really what made me choose this one: a remote cabin in the snowy mountains…

It’s supposed to be a romantic getaway. The original plan for the guests is to ski, light a fire, get cozy… but then a blizzard hits and someone ends up dead. Because, naturally!

Since no one can leave, that adds another layer of spoooooooky.

‘Stranger in the Lake’ by Kimberly Belle

I actually attended a virtual author event with Kimberly Belle and she talked specifically about this book — it sounds so good (but scary)!

This takes place in a small town, and everyone is a buzz when a young woman marries a rich widower.

So, you can imagine what everyone starts saying when a woman’s body is discovered in the lake behind their house… the same place his ex-wife drowned. YIIKKKESSSSS.

The even creepier part is, the wife recognizes the woman — she was talking to her husband — but the husband is totally denying it.

‘The Blackbird Season’ by Kate Moretti

Trouble starts when 1,000 dead birds fall onto a baseball field in a small town in Pennsylvania.

And while, people in the town start pointing fingers to figure out who’s to blame for the bird debacle, someone they all know goes missing.

The police only have one suspect: the missing woman’s husband. But he’s got people on his side working to prove his innocence… but is he to blame?

One thing I’ve noticed about whodunits… there’s a TON of series out there! On one hand, that’s pretty cool because I like really getting to know and follow characters, but on the other hand, it’s a little intimidating.

I chose this series because I like the core premise: Rose Strickland is a college student and a waitress at a diner. Love it.

In book 1, her best friend disappears. By book 2, she’s a crime-solving bad-ass. Okay, not really, but kind of!

‘One Night Gone’ by Tara Laskowski

The story begins when Maureen is lured to a small beach town to get away and relax… but she disappears.

Thirty years later, Allison is given the chance to house sit in that same small beach town. And she learns about Maureen’s disappearance. Allison is determined to uncover the secrets of this small town… and they are DARK.

Samantha “Sam” Clair is a book editor in London… SOLD.

All is well at the office until the police show up asking lots of questions about a mysterious package that’s been delivered.

A quote about the book says it’s funny and it travels through London and Paris, which I am totally here for.

I read this book over the summer and wow did I devour it — it’s so good (read my full review here)!

The lead is a social media influencer and she’s invited to an old friend’s wedding… only the bride ends up dead the night before she’s supposed to get married.

There’s all sorts of twists and turns and even a touch of romance. I loved this one!

‘The Mother-in-Law” by Sally Hepworth

Lucy has always kept her relationship with her mother-in-law at a distance. But, things get dicey when she (the mother-in-law) ends up dead.

There is a suicide note that says she didn’t want to live any longer with cancer, but an autopsy reveals there is no cancer. What gives?

This is just a two-book series (as of right now), but it’s got high school students at the center of it, and I just cannot resist.

In book one, the lead cheerleader dresses herself in the mascot’s costume and jumps into the river.

This story takes place in Maine, among two best friends. They’ve spent many summers together, only this summer, one of them ends up dead.

While the police say its a suicide, the surviving friend just doesn’t believe that.

Something is up and she’s going to figure it out.

‘When No One is Watching’ by Alyssa Cole

I read this one pretty recently as I kept seeing it on all kinds of book lists. I was a little scared to read it, but it wasn’t too scary (I still jumped at a few parts)

You can read my full review of it here — but basically, it takes place in Brooklyn where gentrification is in full swing.

But there seems to be more than just upgrades and simple changes happening. People are disappearing, shops are changing, cops are more present… and people are dying.

‘The Perfect Couple’ by Elin Hilderbrand

I couldn’t end this list without adding the book that started it all. I’m tell you, this book is SO good!

This is also another wedding-ish whodunit and it takes place on Nantucket (because, Elin). The bride’s best friend ends up dead the night before the wedding and wow, I went through every scenario trying to solve the mystery.

That concludes my list! What are some of your favorite mysteries?

Reading from my Nook really shows off my @impressmanicure 😍 I used leftover nails from random sets to create a Team USA look 🇺🇸 Last night, I watched swimming🏅& tried to watch skateboarding but it gave me so much anxiety! I’m ready to watch surfing 🏄‍♀️ #teamusa #tokyoolympics #olympics2021 #impressnails #impressmanicure
These are a few of my favorite things 🍹Not pictured: Blanche hogging the outdoor fan + my JBL blasting an audiobook 🤠 #sundayfunday #magazinecover #vodka #patiolife #atx #summer
The purple duct tape is having a moment 💜 #Blanche #catinabox #atx #tortiseshellcat #longhairdontcare
Last Friday @sheenahall treated me to dinner at an iconic Austin spot 😋 It was mostly us pretending to be at Don Antonio’s (IYKYK) but do yourself a favor and get the Bob Armstrong dip 🧀 The margaritas ain’t bad either #mattselrancho #atx #atxfoodie #texmex
This! This is one of my favorite Austin traditions that was canceled last summer & I’m so glad it’s back ❤️🤍💙 #atx #atxsummer #julyfourth #ladybirdlake #livelovepaddle #kayaking #fireworks
I bought myself a bouquet from @imperfectfoods & divided it by color 🌼 I have a bunch of old jars under my kitchen sink — these are from tomato sauce & olives... and I love how colorful and simple it all looks 🌿 Cheers to repurposing! #atx #atxsummer #flowerbouquet #imperfectfoods #flowersinjars #patiolife
Life is certainly a crazy ride — two months ago, I was worried about being able to pay my rent & yesterday I drove (yes, me!) a $5 million yacht toward the Golden Gate Bridge ⛵️ Truthfully, when this opportunity came along, I wanted to skip it. It seemed too rugged for me; too scary. ⚓️ But as we approach Father’s Day weekend, I thought about my dad. At times, he was cynical, but he saw life for what it was and he believed in taking opportunities to do cool stuff, meet new people, and hear their stories. So I slapped on my sunscreen and climbed aboard. We only get to do this ride once, so I’m going to keep strapping in and showing up. How about you? 🚤
⚡️⚡️⚡️#newpiercing #lightningstrike #studspiercingstudio
As we celebrate PRIDE 🌈 I’m encouraging you to be mindful of where you shop — go for the stores that are inclusive, that support the LGBTQ+ community now and all year, & that stand up for everyone, even when it’s not trendy ⭐️ I’ve put together a list of LGBTQ+ owned shops to visit & brands supporting PRIDE in different ways — it’s all on Thebitterlemon.com — Got a favorite? Comment here or on the blog so we can spread the love 🏳️‍🌈 Happy PRIDE! #pridemonth #pride #pride2021 #brewdrkombucha #atx #atxpride #loveislove #equalityforeveryone
Just call me Mr. Wilson because I’ve been watching a magnolia bud for weeks, waiting for it to bloom, and today! Today was the day! Beats the titan arum, tho 🤪 #magnoliablossom #patiolife #patiogarden #magnoliabloom #louisianamagnolia #spring #atxspring
Spent the afternoon on the patio to get it spruced up for the szn! 😎 I planted two new succulents, catnip seeds for B, & switched around a few OGs in hopes they’ll grow! 🌿 Looking forward to enjoying cocktails + tunes out here this year 🌼 #patiolife #apt #catio #succulents #atx #atxspring #amateurgardener
I went to my hometown this week to honor a life well-lived & offer hugs and support to a lifelong friend 🤍 There were so many family, friends, coworkers, & acquaintances there to share memories, which is always bittersweet. It’s a huge reminder that, as Dave Matthews sings, life is short but sweet for certain. My friend & I drove through our old stomping grounds — places that were the entirety of our lives. Many places are gone now, although some look exactly as I remembered. They say you can’t go home again — the pieces just don’t fit like they used to. I’m glad to be back in Texas, where I belong, but my heart is in grief. Do the things you’ve dreamed of, say the thing, write the book, take the risk — go for it ✈️ #memories #inmemoriam #hometown #liveyourlife