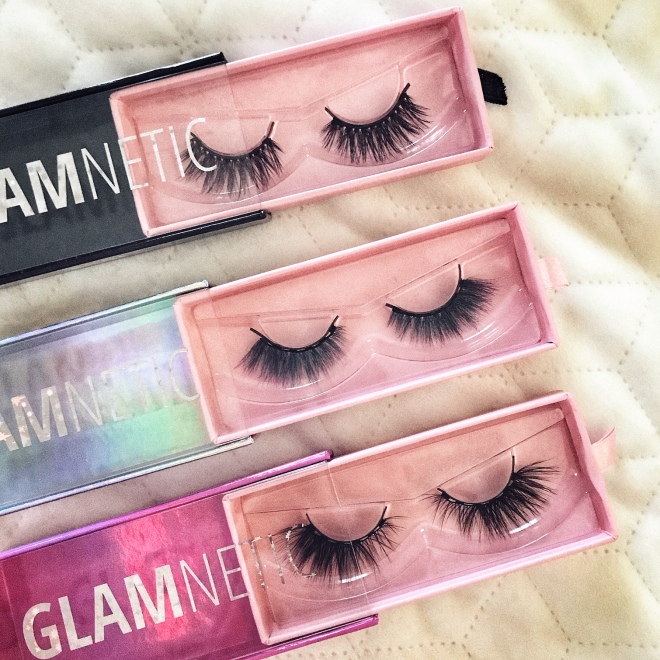 My mom and I were talking about makeup the other day and I was telling her that — even after all of these years performing dance routines in front of a crowd — I have never been able to master applying strip lashes with glue.

I’ve even tried different kinds of glue and I always have to have someone help me or just forget it altogether. In the last few years, there’s been more magnetic eyelashes that have hit the market. I tried a drugstore pair, and while they looked great, they were difficult to apply and it wasn’t long before the magnets fell off!

So today, I’m talking about another brand of magnetic lashes: Glamnetic!

I also ordered a magnetic eyeliner. This is the cool thing about Glamnetic. Instead of the lashes sticking to each other (with your natural lashes between them), these lashes stick to magnetic liner. How cool!

I have actually seen a few beauty bloggers on YouTube use this type of magnetic lash, and it looks MUCH easier to apply than other false lashes.

The Lashes & Eyeliner I Ordered

I ordered two sets of vegan lashes: “Vibe” and “Brat.”

I have to say, Glamnetic has a lot of different lashes to choose from and it was difficult to decide which ones I wanted to try first. I wanted to get two different kinds so I could really give myself a variety.

“Vibe” is more of a natural looking lash (it’s still very high-glam) in that its fuller on the outer ends and has shorter lashes near the inner corner for a good cat eye.

“Brat” is a full, more dramatic lash in that it’s full from end-to-end. This is the type of lash I usually buy, and it’s great for your high-glam days, but leaves me wishing I had something for those more natural-looking days (which is why I got “Vibe”).

I also got “Eccentric,” which are the colored lashes. They are thick and fluffy, with longer lashes on the outer ends. They are mostly green and purple, but have a few black lashes evenly distributed, which I thought would help my natural lashes blend right in.

The eyeliner I got is the magnetic felt tip eyeliner pen in black. They also have liquid liner, but I usually use a felt tip in my standard makeup routine.

When I got the Glamnetic package in the mail, I was excited to see it — a silver bubble mailer! The packaging on the lashes was also impressive. Each pair comes in a box you can use to safely store your lashes when not in use. Love this!

When I was ready to apply the lashes, I did my makeup just as I always do (minus my standard eyeliner). I used the magnetic eyeliner and really didn’t put any extra on — I usually do a tight line close to the lash with a small wing on the outer ends.

I let it dry completely and curled my natural lashes with an eyelash curler. The liner doesn’t feel or go on any different than other felt-tip liners I’ve tried. It’s not heavy or chunky, and it makes for a good line!

You can clip the Glamnetic lashes to fit your lash line, if needed.

And then, I lined up the lash with the liner and it went right on. I cannot believe how easy it was and at first, I kept pulling on the last to make sure it was actually on, and it was!

These lashes are so easy to apply, and they are very lightweight. It doesn’t feel like I’m wearing lashes, but wow they add that level of glam that only a false lash can.

I have worn all three pairs now, and the cool thing is, you can change them up without having to change your makeup. Put on one pair, but then decide you want a different look… no problem!

These are definitely the easiest lashes I’ve ever applied — no learning curve needed. They also look very high-end and I noticed they have six magnets on each strip instead of the usual three I’ve seen.

I am excited to wear these with a variety of makeup looks and I have a feeling they’re going to last a long while.