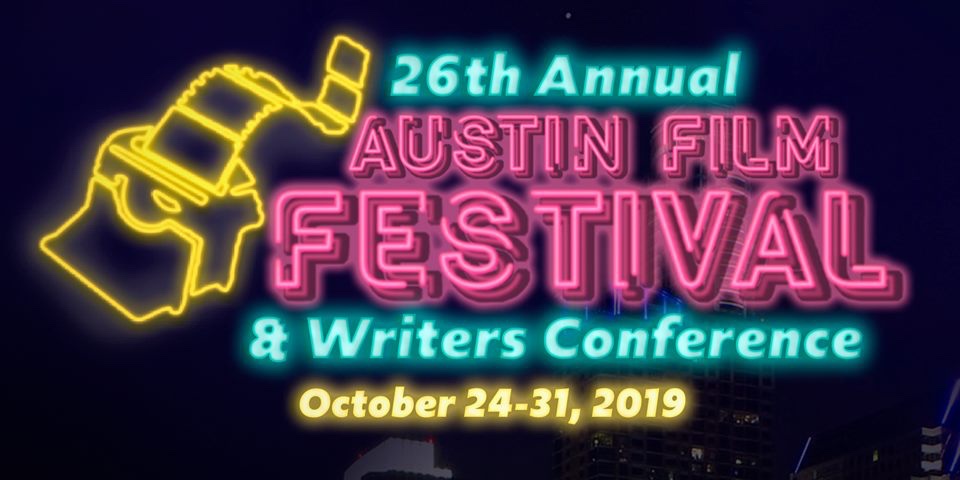 Another year at the Austin Film Festival.

Last weekend and last week, I celebrated my fourth year as a volunteer for the Austin Film Festival and Writer’s Conference! I heard about this festival right when I moved to Austin, as I was listening to a podcast on screenwriting.

The festival is THE biggest writer’s conference in the country and the film festival is quite impressive. Last year, I worked all of my volunteer shifts at the movie theatre and I got to see sooo many movies.

So, I signed up for similar shifts this year, hoping to see lots of movies.

But when I showed up for my first shift, the theatre manager was frazzled and wouldn’t let any volunteers watch the movie. That meant sitting outside the theatre for the duration of the film. I stupidly didn’t bring a book.

After five hours of quite an awful shift, I was wondering if maybe this would be my last year at the festival.

But, during my second shift, I got to see a movie. It was called, “Making Apes” and it was a documentary on the makeup artists for “Planet of the Apes”. It was so fascinating! They talked about the idea for the makeup and prosthetics, and how groundbreaking it was to create a movie starring human-like apes.

It made me wonder about the makeup in several other early films. Very cool!

I had one final shift and although I didn’t get to see any movies (they offered to let us), I had so much fun talking to the other volunteers! They were movie buffs and studying film in school, which was interesting to hear about. It doesn’t hurt that we were at the Drafthouse, so I got a yummy Reese’s milkshake and Sriracha fries 🙂

I mentioned that I felt like the vibe was different this year, and one volunteer explained why, and I don’t want to blast anything on here, but it made sense, and honestly, the Film Fest is such a huge undertaking and most of it is done through the work of volunteers. The whole thing is impressive.

One thing that I will a,ways enjoy about the theatre shifts is seeing and talking to people before they’re about to go into the movie and after they come out. They are always excited and it’s cool to see.

Another year down — see y’all next year!

For more stories about my life, be sure to subscribe to the blog (look to the right) and follow me on Instagram @Orangejulius7 – where I share more of my daily life. Need help with your blog? I can help with all of your digital marketing efforts – just let me know!

Things still aren’t quite right post-freeze & honestly, I’ve hit a wall with pandemic life 😖 I know this feeling will pass, and before I know it, I’ll be writing another book & spinning in my desk chair 🤓 But it’s Friday & I’ve got sparkling wine so cheers, even if I’m cheersing to my laundry piles 🥂🥐 #friyay #cheers #finkeswine #atxfood
SO many local businesses have been helping the community after a tough week & I’m going to do my part by supporting them ❤️ I’m starting with @garboslobster — got the grilled cheese 🧀 What places are you going to support? Where should I eat next?? 😋 #atx #atxfood #garboslobster #grilledcheese #grilledcheeseplease #tomatosoup #texasfreeze
Leeeetttt the sun SHIIIINE 🌞 The snow is gone & I was able to move ALL of my plant babies from their hiding places (from Blanche) on the tops of my kitchen cabinets back to the patio 🌿 They seemed to have survived, but they need sun and fresh air... I think we all do 💗 #atx #atxwinter #patiodecor #greenthumb #aptlife #catio #pottedplants #texasfreeze
It takes a lot to survive right now. This was a reminder I told myself last year when I was trying to figure out pandemic life. Now, throw a snowstorm and no running water on top of it ❄️ This is my busiest week of work this year, and I’m spending my lunch breaks scooping snow for a water supply and stuffing pillows into my windows to trap heat. I’m thankful for the electricity I have to stay warm, thankful for internet to meet deadlines, thankful for clean clothes and wool socks. But wow, I’m exhausted. 💙 #texasfreeze #atxwinter #atxfreeze2021 #freelancer #balancingact #woolsocks
Blanche took her first steps in the snow 🐱🐾 #ATX weather #snowday #pawprints #kitty #sneaux #snowpocalypse
Snowwww dayyyyy ❄️🥶 #atxweather #texasfreeze #icestorm #uggboots #bundledup
Me & Blanche, debating on who gets the unicorn blanket 🦄 It’s snowing outside, which means I had every reason to wear my cashmere + wool set from @summersalt — details on Thebitterlemon.com today! ❤️ #linkinbio #thebitterlemon #atxwinter #snowday #texasfreeze #crueltyfreefashion #summersalt
My barrel cactus needs a warm blanket & a hot toddy ❄️ #atxwinter #cactus #texasweather #bbrrr
Happy Pub Day to me! 🤓 I never thought I’d share this, but my mind created a small town with a cool truck stop and a tattoo artist with big dreams 💜 All of the details are on the blog today & I’m already looking forward to #nanowrimo 2021! Thank you for all of your kind messages + support #linkinbio #thebitterlemon #selfpublishedauthor #firstnovel #selfpublished
It’s official: we’ve been in quarantine way too long 🤣 Remember when I wrote my first novel in the Q? Well, it comes out Tuesday & I’m sharing all sorts of details about the plot, how I wrote it, etc. on Thebitterlemon.com today 🤓 Cheers to furry writing buddies! #linkinbio #thebitterlemon #nanowrimo2020 #selfpublished #firstnovel #calicocat
I got my first dose of the Moderna COVID-19 vaccine Monday 💉After a bit of a rough 24 hours of side effects, I’m sharing my entire experience on Thebitterlemon.com 💙 I continue to be grateful for my health & for those on the frontlines, working to help us tackle this virus #linkinbio #thebitterlemon #vaccine #covidvacccine #quarantinelife #tiedyeshirt
Take a look at my King Cake! I ordered it from @counterspacebr & decorated it myself 💜 I’ve been missing so many things about Louisiana lately & since Mardi Gras is quickly approaching, I put together a list of ways we can all celebrate safely from afar while still supporting NOLA businesses! 💚 Head over to Thebitterlemon.com to see my list that has masks, food, drinks, clothes, cigars, voodoo, & charities to support this special city 💛 #linkinbio #thebitterlemon #neworleans #mardigras #supportnola #kingcakeseason #kingcake #fattuesday