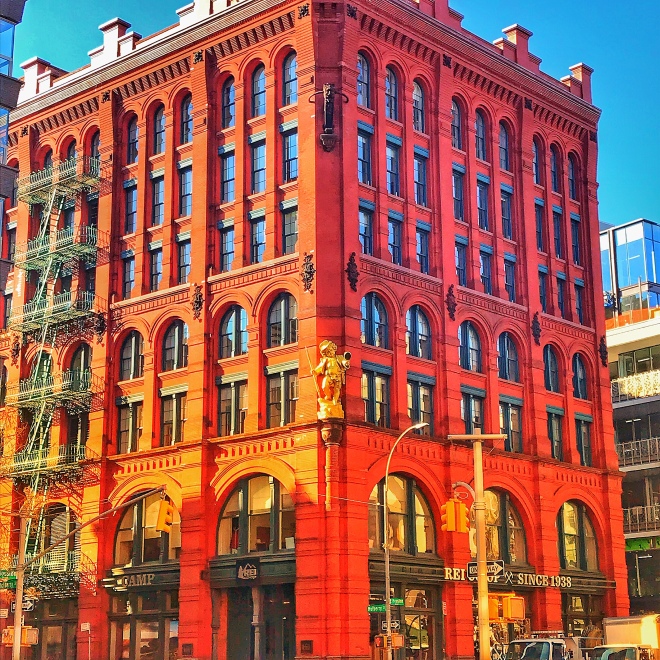 Greetings from the Big Apple! I got to NYC yesterday and immediately got to sightseeing.

This is my second time in New York, with the first being just last December. When I was here then, I did tons of touristy sightseeing, so I made a list of different things to do this time.

This was on my list when I came to visit in December, but I didn’t make it. So, I’m making it a priority this time! I’d like to eat at Nom Wah Tea Parlor and just wander around.

I have a ticket to see “Waitress” at the Brooks Atkinson Theatre. I don’t know much about the storyline or the broadway show, but I’m excited to see it!

In these trying political times, I rely on “The Daily Show” and I have a ticket to sit in the audience for a taping. I still have to get in line, but I’m hoping I’ll be able to get in.

Yet another place that was on my list for last time and I didn’t it off. This juicer and veggie butcher looks modern with a menu of healthy goodies.

If you’re a reality TV fan and follow Paige Desorbo, you’ll know that’s she’s often at Sauce — I am 99% sure her boyfriend owns it. The pizza has good reviews, too.

Gaby Dalkin from “What’s Gaby Cooking” was just in town a few weeks ago and named THIS as her favorite place to get cookies. I have no choice but to go.

There are several branches, of course, but I’m excited to see the architecture and take one of their tours.

I’ve heard so much about this place from watching every single episode of “Project Runway”! I’m not sure how big the museum is, but have heard the have rolling exhibits.

This place has been made famous by so many movies. Plus, I think it’s kinda required to eat at a deli while in New York, right? Vegan diet be damned, give me a large meat sandwich and a pickle!

Yep. This is the main reason I’m here! I never really thought I’d get to see a concert at MSG, but when John Mayer announced his tour dates including a stop there, I knew I had to take it while I could. He promises THIS is the tour we’ve all wanted, and well, let’s see it!

Anthony Bourdain fans know Les Halles as the place he reigned as a chef. Now permanently closed, Les Halles stands as an informal memorial to Mr. Bourdain and those of us who admired him.

The Doughnuttery in the Plaza Hotel

I had afternoon tea at the Palm Court in December, and wandered around the little shops and restaurants within The Plaza. This place sells a wide variety of cute donuts and I’ve got to get some for breakfast.

I only got to see a small portion of Central Park last time and I know there’s much to be explored. I’m hoping to see Strawberry Fields and the Conservatory Garden.

…And there’s my list! Some things I’m definitely doing, others may fall to the wayside. That’s the adventure, right?

For more travel inspiration, be sure to subscribe to the blog (look to the right) and follow me on Instagram @Orangejulius7– where I share more of my daily life. Live in the Baton Rouge area? I’m teaching a Blogging Boot Camp this September. If you don’t live in Baton Rouge, you can always schedule a Creative Session with me!