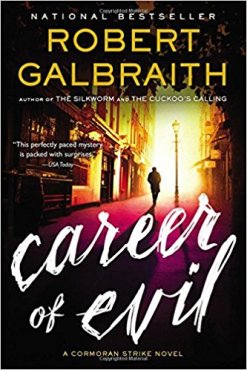 Greetings from Harlingen, Texas! I flew in last night and am heading back to Austin in a few hours. I’m writing this from the airport, which smells like a giant toilet, so there’s that (no offense, Rio Grande Valley).

I have MUCH to discuss about Blanche’s Book Club’s latest read: “Career of Evil” by Robert Galbraith. So, let’s not waste any time!

“Career of Evil” is the third book in the Cormoran Strike series and it’s also the final one that’s published. Because of this, I’ve had it sitting on my shelf for the better part of a year, waiting for the perfect time to read it, because I just didn’t want to accept that this series would be over.

But, as I was reading chapter three, I got distracted and did some Googling. Turns out, J.K. Rowling (“Galbraith” is her pen name for this series) had recently announced the title for the fourth book! Although there is no publishing date, fans anticipate it will be soon. She also said she had ideas for 6 MORE books!

This news made it much easier for me to fly right through this book. I absolutely love these! My favorite thing about them is how visual the writing is – I feel like I’m put right in with the characters and can almost hear their voices.

If that doesn’t sound psychotic enough for you, I even bought myself some cranberry-orange scones and made tea while I read. There’s nothing quite like pretending you’re in London attempting to solve the case with a private detective and his secretary! Before I get in too deep, here’s the official description of the book, from Amazon:

Career of Evil is the third in the highly acclaimed series featuring private detective Cormoran Strike and his assistant Robin Ellacott.
When a mysterious package is delivered to Robin Ellacott, she is horrified to discover that it contains a woman’s severed leg. Her boss, private detective Cormoran Strike, is less surprised but no less alarmed. There are four people from his past who he thinks could be responsible–and Strike knows that any one of them is capable of sustained and unspeakable brutality.

With the police focusing on one of the suspects, Strike and Robin delve into the dark and twisted worlds of the other three men. But as more horrendous acts occur, time is running out for the two of them…

I won’t give anything away, but I will say that this one definitely had a more personal twist to it, which I enjoyed. Here we are, in book three, and I am still wondering if anything will ever happen between Robin and Strike (whom I imagine to look like Gerard Butler)?! I was more emotionally invested in this book, and it made me that much more thankful that we’ve got a fourth one on the way.

At least a year ago, BBC announced there would be a TV series based on these books but then I never heard much about it. Upon further investigation, it looks like we’ll be able to watch the series (which is based on all three books) this summer on Showtime – YES!

The next book Blanche’s Book Club will be reading is “The Vanderbeekers of 41st Street” by Karina Yan Glaser. I’m actually about to go read some of it now…

Enjoy the rest of your weekend!

“Do I accept things the way they are, or question authority? I chose the latter, and from that point forward I was branded a troublemaker. Once the initial shock wore off, it became a badge of honor. I’ve been making trouble ever since — which, to me, means taking on the powers that be, being a thorn in someone’s side, standing up for injustice, or just plain raising hell.”💪🏼 I related to this on so many levels, but my full review is on Thebitterlemon.com 👑 #linkinbio #maketrouble #cecilerichards #atx #atxblogger #blanchesbookclub #bookstagram #thebitterlemon #bookrec #bookreview #nonfiction
I imagined these as Long Island Iced Teas🍹& then realized I should’ve made them have 1 lemon wedge & 1 lime wedge🤦🏻‍♀️I’m working on a pineapple page next🍍Work has been rocky this week + I’m feeling the pull to start something new, just gathering up all the courage and ideas to begin. Sometimes that’s the hardest part 🍋 #quarantinelife #day18 #adultcoloringbook #creative #atx #longislandicedtea
Quarantine uniform: leggings + sweatshirt + hair clip 💁🏻‍♀️ Hmm, ok this was also my uniform before self-isolation. I’m feeling a tad more motivated this week & have been wearing makeup from my @kabcosmetics stash! Today I’m wearing blush, highlighter & lip from @briellebiermann ‘s Must Have Bundle (Sugar Rush highlighter, Strawberry Shortcake blush & Whip lipstick)🍓It’s ALL on the blog today! #linkinbio I love supporting female-founded brands + they’re cruelty-free🐰 #kabcosmetics #beautyreview #makeupreview #quarantine #quarantinelife #tiedye #quarantinefashion #thebitterlemon #atxblogger #texasblogger
Quarantine Day 15: It’s my last day of staycation; back to work in the morning. Rations are stable thanks to food delivery. Paranoia (moderate), hypochondria (high), insomnia (manageable), boredom (impossible)😎 A new installment of “The Quarantine Diaries” is up on Thebitterlemon.com #linkinbio #atx #quarantinelife #quarantine #atxblogger #thebitterlemon #sunday #coronavirus #coronadiaries
“We sat on the steps that led to the house and there was that fucking pitcher again, that tray. There was something Stepfordish about everything being served in a pitcher, instead of, I don’t know, putting your face in a giant punch bowl and just vacuuming it up. I don’t know what I wanted. I guess I wanted Madison to be a little more like me and a little less like the kind of person you had to be to live with this sort of wealth. And yet here I was, living on their estate, my bank account filled with so much money, not having to spend a dime while I strolled the grounds. This was my life, a good part of it, hating other people and then hating myself for not being better than them.”🔥It’s Quarantine day 14 for me & I’m reading books faster than I can review them. My thoughts on “Nothing to See Here” are on the blog #linkinbio - where you can also find my Quarantine reading list🤓 #thebitterlemon #nothingtoseehere #kevinwilson #blanchesbookclub #readheadsbookclub #fiction #bookstagram #atxblogger #covıd19 #quarantinereads
Anything goes in quarantine: Sour Patch Kids for breakfast, margaritas before 5, wearing PJs for workouts... 🍭🍹My list of quarantine reading is on Thebitterlemon.com #linkinbio #thebitterlemon #quarantinelife #candyforbreakfast #quarantinereads #atxeats #atxblogger
For some, Quarantine life might mean pulling out your coziest loungewear or finally learning how to bake a sweet treat 🥐 On day 11, Blanche made a bed from a cardboard box lid used as a takeout tray🐱We are all doing the best we can. But! Blanche’s Book Club has rounded up 12 reads for quarantine! I’m proud of this thoughtful list, because there’s really something for everyone 📚#linkinbio Let me know what you’re reading, too! #thebitterlemon #blanchesbookclub #quarantinereads #quarantinereading #bookrecs #bookstagram #atxblogger
I mean... 😋Quarantine & self-isolation still allows for delish takeout🥡This spread is from @peachedtortilla & if you’re at all worried, I scheduled curbside pickup & it was placed in my car at a safe distance (the employee was also wearing gloves). This is a small way to help the local economy & celebrate the culture that makes our city so special 🍑 I ordered from @thesteepingroom last week & have a delivery from @skullandcakebones coming this weekend ☠️ If there’s a spot you like, tag ‘em below & lets show them some love right now 💚 #atxfood #quarantinelife #getpeached #takeout #coronatime #atxeats #covid_19 #atxblogger #vegetarian #vegetariantakeout #eatlocal #greatamericantakeout #thegreatamericantakeout
I was supposed to be on a flight to Iceland in approx. 3 hours... We’ve all got our stories. Instead, I dug through my stash & found a bunch of liquid highlighters that BEAT the Tarte Shape Tape Glow Wand 👊🏼 It’s all on Thebitterlemon.com today✨ #linkinbio Now, back to my at-home facial and marathon reading sesh🤓 #thebitterlemon #tarteshapetape #tarteglowwand #tartereview #atx #atxblogger #texasblogger #beautyreview #liquidhighlighter
Walgreen’s sectioned off places for customers to stand in line, 6 ft apart. Times have been changing FAST out there📍Today is Quarantine day 8 & I’m trying to keep life at home slow & stress-free... I’m in it for the long game. My diary from day 1-6 is on thebitterlemon.com — more Diaries coming soon! 😷 #linkinbio #atx #quarantinelife #socialdistancing #coronatime #atxblogger #texas #thebitterlemon
My setup for virtual yoga classes🧘🏻‍♀️ It’s not the same, but every attempt at normalcy puts me closer to sanity. I’ve started a new series on the blog: “The Quarantine Diaries” — Daily thoughts on life in isolation; the first installment is on Thebitterlemon.com now & it covers day 1-6 in quarantine. Read up + let me know how you’re doing! 😷 #linkinbio #quarantinelife #atx #virtualyoga #homelife #coronavirus #quarantinediaries #quarantine #selfisolation #thebitterlemon #atxblogger #texasblogger
“Van Rooijen struggled to keep himself from panicking. On K2, the altitude was going to kill anyone in the end. And it was finally killing him. Shit. It only took a small mistake to slip and fall.”🏔🗻 This was a special read for Blanche’s Book Club as this book was willed to me by my dad, an avid reader. The full review is on thebitterlemon.com & Blanche and I are working on a reading list for everyone in quarantine! 💛 #linkinbio #nowaydown #nonfiction #blanchesbookclub #k2 #bookrec #bookstagram #atxblogger #quarantinelife #quarantinebooks