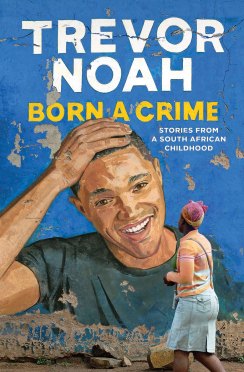 Hey yoooo! I have been on a waiting list at the library for MONTHS for my latest read. I guess everyone wanted to get their paws on Trevor Noah’s “Born a Crime: Stories From a South African Childhood”.

I will admit I wasn’t jumping for joy at first about this book, but I do watch “The Daily Show” religiously, so I was looking forward to learning more about this daily host. Here’s the scoop on the book from Amazon.com:

Trevor Noah’s unlikely path from apartheid South Africa to the desk of The Daily Show began with a criminal act: his birth. Trevor was born to a white Swiss father and a black Xhosa mother at a time when such a union was punishable by five years in prison. Living proof of his parents’ indiscretion, Trevor was kept mostly indoors for the earliest years of his life, bound by the extreme and often absurd measures his mother took to hide him from a government that could, at any moment, steal him away. Finally liberated by the end of South Africa’s tyrannical white rule, Trevor and his mother set forth on a grand adventure, living openly and freely and embracing the opportunities won by a centuries-long struggle.

Born a Crime is the story of a mischievous young boy who grows into a restless young man as he struggles to find himself in a world where he was never supposed to exist. It is also the story of that young man’s relationship with his fearless, rebellious, and fervently religious mother—his teammate, a woman determined to save her son from the cycle of poverty, violence, and abuse that would ultimately threaten her own life.

The stories collected here are by turns hilarious, dramatic, and deeply affecting. Whether subsisting on caterpillars for dinner during hard times, being thrown from a moving car during an attempted kidnapping, or just trying to survive the life-and-death pitfalls of dating in high school, Trevor illuminates his curious world with an incisive wit and unflinching honesty. His stories weave together to form a moving and searingly funny portrait of a boy making his way through a damaged world in a dangerous time, armed only with a keen sense of humor and a mother’s unconventional, unconditional love.

…Now I will say, I wouldn’t describe this book as “hilarious”, but it did include some funny stories. Was it gripping and unable to put down? No. But I will also admit I’m not really a fan of short stories.

If you’re interested in South African history, or the tales of Trevor Noah, add this book to your list!

The book Blanche’s Book Club will be reading next is “Head for the Edge, Keep Walking” by Kate Tough.

And I know said I loved three-day weekends, but this four-day week sure did kick my ass! Maybe it was all of the adventures I had last weekend? I feel a whole lotta loungin’ coming on… see you all on Monday!

Last week, I completed my first juice cleanse! 🍎🍊It was much different than I anticipated & I learned a lot about hunger and my food habits 🥬 I’m sharing all the details on my blog, Thebitterlemon.com 🥕 Have you ever juiced?! #juicecleanse #detox #coldpressedjuice #squeezedonline #3dayjuicecleanse
🌈 sprinkles are key @thebakedbear has been on my ATX “to-visit” list foreverrrr & I finally made it! 🍪 I got funfetti cookies + cookie dough ice cream + sprinkles... 😋 #thebakedbear #atx #atxfood #sprinkles #icecreamsandwich #summer #atxsummer
Reporting LIVE from @emosaustin - It’s @lalakent giving us the scoop on sobriety, narcissists, Ocean, and she’ll tell us why 50 Cent is her hero 🎤 #givethemlala #givethemlalalive #brandnew #50cent #livepodcast #emosaustin #atx
“Then I howled into my pillow—a deep, blood-vessel popping howl of frustration and envy directed at Will, at my friends, at everyone else who was out there starting jobs, taking trips, discovering new things—all unencumbered by illness. That everyone’s lives were starting while mine was over before it had begun seemed unspeakably unfair.” - @suleikajaouad #betweentwokingdoms
4 rescheduled dates, 1 canceled show, & 2 years later, Bieber delivered 💜 #justicetour #justicetourhouston #justinbieber #lonely #livemusic #yummyyummy
Squeezed a blood orange into my standard margarita recipe & it’s so beautiful! 🍊Cheers to homemade cocktails! #makeshiftmargarita #bloodorange #tgif #atx #atxdrinks #patiolife #cazadores #silvertequila
Pink hair, don’t care! 🌸👛👄👩🏻‍🎤 Hair by @pinklotusbeauty_ #style #atxhair #pinkhair #springstyle #atxhairsalon #atxstyle #selfie
I didn’t need this reminder, but @girlwithnojob gave it to me anyway: This world needs comedians. Shit is too depressing sometimes not to laugh at it, and there’s nothing quite like giggling about the last two years, in a room full of strangers 🙌 #notlikeothergirls #atx #paramounttheatre #girlwithnojob #comedians #standupcomedy
Seemed like the right time to visit the Punk Museum🤘🏼Fuck capitalism #iceland #icelandpunkmuseum #icelandpunk #punkrockforever
Celebrated @sheenahall ‘s birthday with a trek under one of the worlds largest glaciers! 💎 Truly unreal — the ice felt like glass, but looked like ocean waves 🌊 Did I mention it snowed allllll day?? ❄️ #Iceland #glaciercave #jokulsarlon #jokulsarlonglacierlagoon #höfn
Site of the DC3 plane wreck from 1973 ✈️ It was a two-mile walk each way — well worth it! Fact: Justin Bieber was there in 2015 😎 #dc3planewreckage #solheimasandur #iceland #travel #tourist #illshowyou
First stop after a very long travel day: @bluelagoonis 🤩 Best bath I’ve ever taken #bluelagooniceland #iceland #travel #spa #lagoon