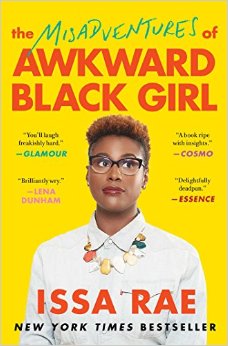 Hello! Happy Weekend Eve! You guys… I took a new fitness class on Wednesday night, which kicked my ass so hard I thought I was going to puke… and despite being so sore yesterday, I still went to two dance classes last night. So today I basically want to die.

But, hey everything is always okay on a Friday, right? Anyway, I finished reading another book for the book club, one that I was just SO excited to read: “The Misadventures of Awkward Black Girl” by Issa Rae. Here’s the description from Amazon:

In this universally accessible New York Times bestseller named for her wildly popular web series, Issa Rae—“a singular voice with the verve and vivacity of uncorked champagne” (Kirkus Reviews)—waxes humorously on what it’s like to be unabashedly awkward in a world that regards introverts as hapless misfits and black as cool.

I’m awkward—and black. Someone once told me those were the two worst things anyone could be. That someone was right. Where do I start?

Being an introvert (as well as “funny,” according to the Los Angeles Times) in a world that glorifies cool isn’t easy. But when Issa Rae, the creator of the Shorty Award-winning hit seriesThe Misadventures of Awkward Black Girl, is that introvert—whether she’s navigating love, the workplace, friendships, or “rapping”—it sure is entertaining. Now, in this New York Timesbestselling debut collection written in her witty and self-deprecating voice, Rae covers everything from cybersexing in the early days of the Internet to deflecting unsolicited comments on weight gain, from navigating the perils of eating out alone and public displays of affection to learning to accept yourself—natural hair and all.

The Misadventures of Awkward Black Girl is a book no one—awkward or cool, black, white, or other—will want to miss.

I’ve basically had a girl crush on Miss Rae since the debut of her HBO series “Insecure” last fall. Little did I know that the chick was not only the lead actress in the show, but also the lead writer of it, having based the whole series on her successful YouTube show.

But her collection of stories was published before anything happened with HBO, so it’s definitely a different side of Issa. There are some pretty funny bits in there – particularly about how she was Catfishing people online before it was a thing, and well before she could drive.

There are several stories about her childhood, her family, and in general, her observations of black culture – despite the fact that she’s never wanted to be a voice on the “black experience”.

The story that stuck out to me the most was a simple one about her being robbed – nearly all of her film and computer equipment was stolen, including lots of work she’d already accomplished for film school. It took lots of time for her to get back on her feet (it was thousands of dollars’ worth of equipment), and that’s essentially how she came up with the idea for her YouTube series – she just wanted to share the story of her life, and how awkward she felt at all times.

This is why I love Issa so much – she’s cool as hell, but thinks she so awkward or insecure. When, in reality, we basically all feel that way (right??). It’s the great equalizer… well, minus Olivia Palermo. Pretty sure she’s never felt awkward or insecure in her whole life.

If you’re a fan of Issa, or comedians, this would be a good book to check out. I wouldn’t necessarily recommend it for literary critics.

The next book Blanche’s Book Club will be reading is “Goodnight Nobody” by Jennifer Weiner. Feel free to read along with me next week by giving me a shout on social media @OrangeJulius7 – I’d love to hear from you!

This weekend, I’m looking forward to tackling a few dance rehearsals (I’m performing on stage at the end of the month), and hitting up a romance reading event at a nearby library. I am also totally planning to watch the Grammy red carpet, but not the actual Grammy’s, given that no one good is performing. Yeah I said it, Bey.

Anyway – I’ll catch you all on the flipside!