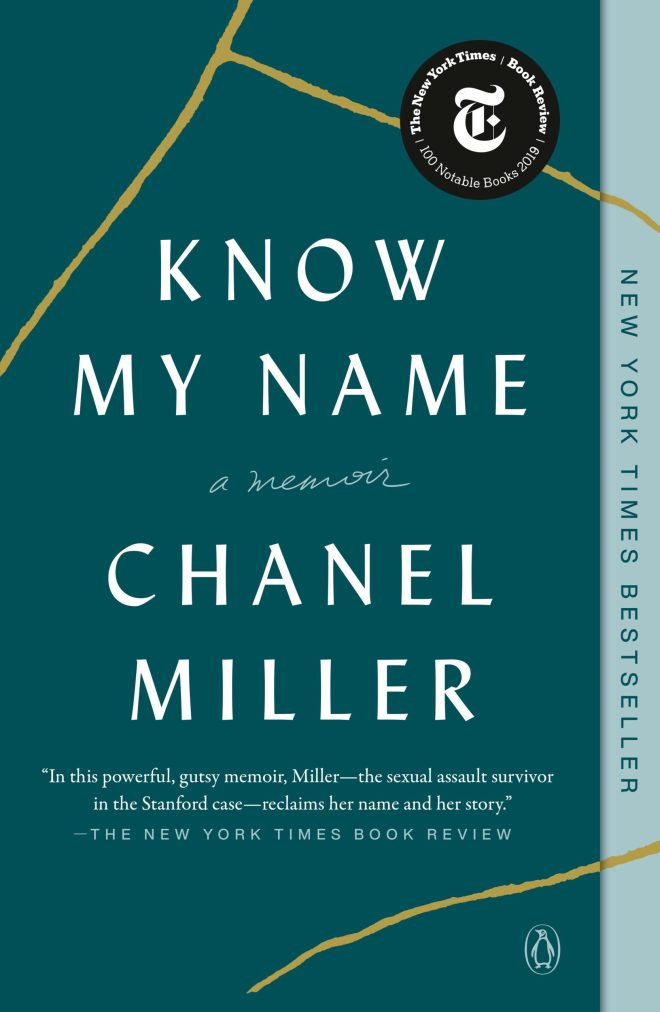 I mentioned this book — “Know My Name” by Chanel Miller — in my list of AAPI authors last week. I read it in one day, and am so glad I finally read it.

But, before I jump into the book, I want to clarify something that’s been on my mind. When I shared the AAPI list of books, I said that reading books from diverse authors wasn’t going to solve many of these bigger problems we have in America, such as institutional racism and white supremacy.

However, I wanted to share the book list because reading books from diverse authors has really helped me understand and learn more about other cultures. But over the weekend, I saw several sentiments from AAPI authors, along with Black authors, that it pains them that innocent people have to die for white people to buy their books or support their businesses.

It’s important for white people to listen to their voices and understand where they’re coming from, so I just want to reiterate that I don’t want anyone’s efforts to stop when they put down a book. It’s important we put our education and our empathy into action — usually by voting.

Having said that, let’s jump into this book because I have lots to share on it!

Please note that the following may contain triggers related to sexual assault and/or rape.

“Know My Name” is Chanel Miller’s account of being sexually assaulted by Brock Turner, who was often praised in the media as being a Stanford swimmer. This case was all over the news, but Chanel Miller’s name was kept out of it to protect her privacy.

This book is the first time she shared her name and her side of the story with the world.

I don’t know if I would have picked up this book on my own, but Chanel did interviews on some shows I watch: “The Daily Show” and Oprah’s “Super Soul Sunday” and what she shared was so brave. So, I added this to my reserve list at the library.

Chanel shares a bit about her childhood and growing up, but the bulk of the book is her account of what happened that night (what she can remember). I appreciated her raw honesty about waking up in the hospital and getting a “rape kit” completed. Throughout the entire book, she shares the perspective that we don’t often get: a victim’s account of ALL the steps you have to take in order to press charges against someone.

She shares details about going to court, the individual hearings, writing her victim’s impact statement, and her recovery after the legal battle ended.

I marked so many things in the book that I’ll share here:

Memorable Quotes From ‘Know My Name’

Just a note that there are book club questions in the back of the book… which I irresponsibly didn’t take note of, so there may be unintentional duplicates!

I have general book club question printables in my Etsy Shop if you’re looking for additional questions that will work for any book, but here are some specifics:

There were, of course, parts of this book that were difficult to read. But, I could relate in so many ways to Chanel’s story and it was comforting to know that I’m not alone, and every victim deals with trauma in their own way.

I cannot speak for every victim and say, “Read this!” Because I know it may just be too much. But I would suggest reading it if you know someone who’s been sexually assaulted, or if you’ve ever questioned why a victim wouldn’t press charges or go public sooner.

I actually read several books last week, so my end-of-the-month YouTube video is going to be packed with goodies 🙂 I hope you all have a great week!

For more book recommendations, be sure to subscribe to the blog (look to the right) and follow me on Goodreads @thebitterlemon – where I share more of my book picks. Also, check out my printable bookmarks and Book Club Journal Pages in my Etsy Shop.

I started this week like so many others — with hope that I’d find a gig to help pay my bills. The pandemic cut my monthly income by 80-90% and it’s been an entire year of ups and downs 😫 But I’m ending the week with 3 new gigs. It’s not pre-pandemic cash, but it means I get to have a taste of normalcy, that I get to stay in my apartment, that I get to treat myself 🌟 I know this isn’t over. But I do know that self-talk, manifestations, dreaming, hoping... it’s how I got out of bed every day. Here’s to yet another chapter. Let’s see how this goes! 💖 #manifest #create #dream #thebitterlemon #writer #freelancewriter #armstack #newjob #writingjobs
I got my first pair of non-prescription blue-light blocking glasses from @eyebuydirect 🤓 I’ve purchased 5 pair of glasses from them (prescription, sunglasses) over the years & am sharing it on Thebitterlemon.com today 👩🏻‍💻 I’ve had them for 2 weeks and wear them all the time (I accidentally ran an errand with them yesterday) 👓 Do you wear blue-light blockers? // Style: “Perry” in coral #thebitterlemon #linkinbio #eyebuydirect #bluelightglasses #bluelightblockingglasses #atx #selfie #glassesgirl #glassesfashion
I didn’t think I’d be so emotional seeing and holding this book, but I am 💙 It’s the 5th book I’ve written but my first try at long-form fiction. Not only do I love this story, these characters, this town in the pages, but I learned so much writing this:
Grabbed my Easter candy & hit the road in search of Bluebonnets! 🕵️ Found a few, but I still have more spots to visit this month — they are so pretty 🦋#texasbluebonnets #bluebonnetseason #atx #bluebonnetfield #spring #signsofspring
I got my second dose of the COVID-19 vaccine last week & am counting down the days to freedom 💉 I’m grateful for every person that had a part in creating these vaccines to bring us closer to better days: doctors, scientists, lab workers, researchers, trial participants, everyone 🦠 I did have some gnarly side effects & I’m sharing it all + tips for signing up to get a vaccine on Thebitterlemon.com today 🔬 PS. My mask is from @studiomucci & it’s my favorite one! 💖 #vaxxed💉 #vaccine #vaccinated #atx #covidvacccine #sciencewins
Feeling a bit brighter now that I’ve hung my lemon + magnolia leaf wreath! 🍋 I’ve also updated my Patio Playlist #linkinstory & I’m loving the new bops 🌼 I’m manifesting all sorts of fresh starts this season! #texas #atx #texasspring #diywreath #lemonwreath #springdecor #homedecor #springwreath
Congratulations, Stephanie & Kris! 🤍👰🏻🤵🏻 #zoomwedding #brideandgroom #forever
What a year it’s been 🦠 Some days, it feels like 10 years have gone by and my thoughts of life without masks and social distancing are fuzzy, but then I’ll get a clear memory of a long plane ride, a bowl of ramen at a crowded counter in NYC, or a John Mayer concert and I remember the joys of life that I miss so much 💙 I’m sharing an honest account of my last year in quarantine: the money I lost, what I ate, anxieties, things I did for fun, and how I’ve dealt with the struggle of it all — it’s on Thebitterlemon.com today (strap in, it’s a long one) ☠️ Here’s to hoping the next year brings back all the things we’ve missed #linkinbio #thebitterlemon #pandemic #quarantine #quarantinelife #ayearinquarantine #memories #covidlife
Slow work week = lots of bath bombs, books & vino 🤩 #lushbathbomb #seeingstars #selfcare #hellyeah #relax #bathtime
Happy Birthday, Blanche! 🎈Glitter balloons, bird watching, salmon treats... it’s all of her favorite things today 🎀 Love my fuzzy girl so much! #happybirthday #catbirthdayparty #itsyourbirthday #catlady #glitterballoons
“Life in plastic: it’s fantastic!” 💖 Just coloring my way thru the Q + had a memory... I loved coloring as a kid. When I was 6 or 7, the Rite Aid near my house was having a coloring contest. It was spring, so the picture was an Easter bunny with a big decorated egg. I colored it and my dad turned it in for me and the employees hung it on the wall with all of the other entries 🐰 I ended up winning the contest, but was super sick when it was time to claim my earnings. But my dad and I went to the Rite Aid — I think we got medicine there, too — and I specifically remember the pharmacist handing my dad the prize: a giant blue suitcase filled with crayons 🖍 They were in neat rows in color-order and each crayon had its own slot 🤍 That was a big win #memories #coloring #crayons #barbie #quarantinelife
I read some really great books by Black authors in February 😍 I got an insider’s view of the American Presidency, read about the power and influence of Malcom X, & got the backstory on Maverick Carter (if you know, you know) 🖤 I added Black authors to my TBR list for the entire year. The more I learn, the more I want to know. What books did you read last month? #blackhistorymonth #februaryreads #blanchesbookclub #blackauthors #apromisedland