It’s been awhile since I made a reading guide — since the start of the pandemic — so I figured it was time to whip up some reading recommendations.

But, I wanted to do something different than what Blanche’s Book Club usually does… enter: the royals! I’ve been seeing so many popular reads that focus on the royal family, but also fictional stories about princes and dukes.

‘The Royal We’ by Heather Cocks & Jessica Morgan

American Bex Porter was never one for fairy tales. Her twin sister Lacey was always the romantic, the one who daydreamed of being a princess. But it’s adventure-seeking Bex who goes to Oxford and meets dreamy Nick across the hall – and Bex who finds herself accidentally in love with the heir to the British throne.

Nick is wonderful, but he comes with unimaginable baggage: a complicated family, hysterical tabloids tracking his every move, and a public that expected its future king to marry a Brit. On the eve of the most talked-about wedding of the century, Bex looks back on how much she’s had to give up for true love… and exactly whose heart she may yet have to break.

This is a fictionalized version of Kate and William’s love story and I could not be more of a Kate STAN, so I bought this one and am so excited to read it. Given the reviews, I’m sure I’ll be snagging the sequel, too: “The Heir Affair.”

The sensational biography of Princess Diana, written with her cooperation and now featuring exclusive new material to commemorate the 20th anniversary of her death.

When Diana: Her True Story was first published in 1992, it forever changed the way the public viewed the British monarchy. Greeted initially with disbelief and ridicule, the #1 New York Times bestselling biography has become a unique literary classic, not just because of its explosive contents but also because of Diana’s intimate involvement in the publication. Never before had a senior royal spoken in such a raw, unfiltered way about her unhappy marriage, her relationship with the Queen, her extraordinary life inside the House of Windsor, her hopes, her fears, and her dreams. Now, twenty-five years on, biographer Andrew Morton has revisited the secret tapes he and the late princess made to reveal startling new insights into her life and mind. In this fully revised edition of his groundbreaking biography, Morton considers Diana’s legacy and her relevance to the modern royal family.

An icon in life and a legend in death, Diana continues to fascinate. Diana: Her True Story in Her Own Words is the closest we will ever come to her autobiography.

At the beginning of lockdown, I watched a documentary on Princess Diana and realized I didn’t know much about her… and I want to. This biography looks like a solid place to start.

Vivian Forest has been out of the country a grand total of one time, so when she gets the chance to tag along on her daughter Maddie’s work trip to England to style a royal family member, she can’t refuse. She’s excited to spend the holidays taking in the magnificent British sights, but what she doesn’t expect is to become instantly attracted to a certain private secretary and his charming accent and unyielding formality.

Malcolm Hudson has been the Queen’s private secretary for years and has never given a personal, private tour…until now. He is intrigued by Vivian the moment he meets her and finds himself making excuses just to spend time with her. When flirtatious banter turns into a kiss under the mistletoe, things snowball into a full-on fling.

Despite a ticking timer on their holiday romance, they are completely fine with ending their short, steamy fling come New Year’s Day…or are they?

I thought this looked so good to read during the holidays!

What if America had a royal family?

When America won the Revolutionary War, its people offered General George Washington a crown. Two and a half centuries later, the House of Washington still sits on the throne.

As Princess Beatrice gets closer to becoming America’s first queen regnant, the duty she has embraced her entire life suddenly feels stifling. Nobody cares about the spare except when she’s breaking the rules, so Princess Samantha doesn’t care much about anything, either–except the one boy who is distinctly off-limits to her. And then there’s Samantha’s twin, Prince Jefferson. If he’d been born a generation earlier, he would have stood first in line for the throne, but the new laws of succession make him third. Most of America adores their devastatingly handsome prince . . . but two very different girls are vying to capture his heart.

The power. The drama. The intrigue. The Crown. New York Times bestselling author Katharine McGee imagines an alternate version of the modern world, one where the glittering age of monarchies has not yet faded–and where love is still powerful enough to change the course of history.

The historical aspect of this one makes it a stretch for me, but it has such great reviews I feel like I need to read it for myself and see! There’s also a sequel coming out in September: “Majesty.” 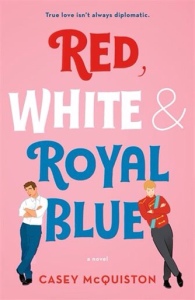 When his mother became President, Alex Claremont-Diaz was promptly cast as the American equivalent of a young royal. Handsome, charismatic, genius—his image is pure millennial-marketing gold for the White House. There’s only one problem: Alex has a beef with the actual prince, Henry, across the pond. And when the tabloids get hold of a photo involving an Alex-Henry altercation, U.S./British relations take a turn for the worse.

Heads of family, state, and other handlers devise a plan for damage control: staging a truce between the two rivals. What at first begins as a fake, Instragramable friendship grows deeper, and more dangerous, than either Alex or Henry could have imagined. Soon Alex finds himself hurtling into a secret romance with a surprisingly unstuffy Henry that could derail the campaign and upend two nations and begs the question: Can love save the world after all? Where do we find the courage, and the power, to be the people we are meant to be? And how can we learn to let our true colors shine through? Casey McQuiston’s Red, White & Royal Blue proves: true love isn’t always diplomatic.

I read this one earlier this year and thought it was so good! Check out my full review for more of the scoop.

‘The Other SIde OF THE COIN: THE QUEEN, THE DRESSER AND THE WARDROBE’ BY ANGELA KELLY

When Angela Kelly and The Queen are together, laughter echoes through the corridors of Buckingham Palace. Angela has worked with The Queen and walked the corridors of the Royal Household for twenty-five years, initially as Her Majesty’s Senior Dresser and then latterly as Her Majesty’s Personal Advisor, Curator, Wardrobe and In-house Designer. As the first person in history to hold this title, she shares a uniquely close working relationship with The Queen.

In The Other Side of the Coin, The Queen has personally given Angela her blessing to share their extraordinary bond with the world. Whether it’s preparing for a formal occasion or brightening Her Majesty’s day with a playful joke, Angela’s priority is to serve and support. Sharing never-before-seen photographs – many from Angela’s own private collection – and charming anecdotes of their time spent together, this revealing book provides memorable insights into what it’s like to work closely with The Queen, to curate her wardrobe and to discover a true and lasting connection along the way.

Fashion AND The Queen?! Yesssss.

After decades of service and years of watching her family’s troubles splashed across the tabloids, Britain’s Queen is beginning to feel her age. She needs some proper cheering up and an unexpected opportunity offers her relief: an impromptu visit to a place that holds happy memories—the former royal yacht, Britannia, now moored near Edinburgh. Hidden beneath a skull-emblazoned hoodie, the limber Elizabeth (thank goodness for yoga) walks out of Buckingham Palace into the freedom of a rainy London day and heads for King’s Cross to catch a train to Scotland, leaving behind a desperate team of courtiers who must find the missing Windsor before a national scandal erupts.

I got my mom this book for Mother’s Day and she said it was really good. It sounds so different and fun!

‘THE DIANA CHRONICLES’ BY TINA BROWN 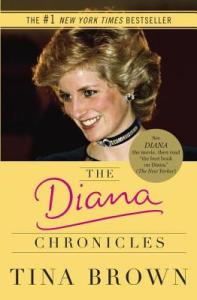 The Diana Chronicles is a 2007 British biographical book by Tina Brown that chronicles the life and death of Diana, Princess of Wales. The book’s release coincided with the increased attention Diana had received leading up to the tenth anniversary of her death in 1997. Brown writes in a preface: The biography was based on over 250 interviews with men and women – members of Diana’s intimate circle, associates in her public life and partners in her philanthropy.

Last year, I read Tina Brown’s book on her life at Vogue and i loved it, so I had to add this one to my list.

‘KATE: THE MAKING OF A PRINCESS’ BY CLAUDIA JOSEPH

Kate by Claudia Joseph, is a true-life fairy tale: the biography of Kate Middleton, Princess-in-Waiting, who is quite possibly poised to be the next Queen of England. The extraordinary Cinderella story of the beautiful, charming, sophisticated young woman who has snagged Britain’s most eligible bachelor, Prince William, Kate is a must-read for all the many followers of the lives, loves, and remarkable turns of the royal family of Great Britain.

Like I said, I STAN Kate Middleton, so this was a must to add.

So, there’s my list! I know there are many other royal-related books out there, and I tried to choose the ones that sounded the most interesting to me. But, if you’ve got other recommendations, please leave them in the comments — I am always looking for more books to read!