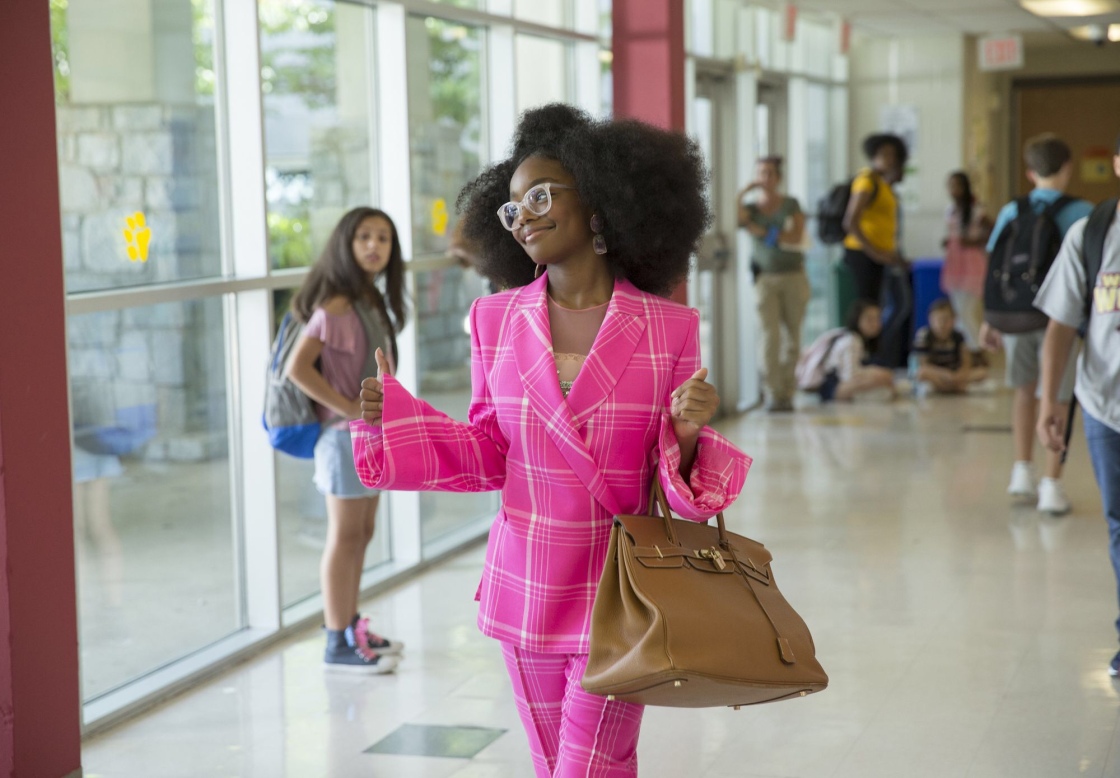 Over the weekend, I saw “Little” — starring Marsai Martin, Regina Hall and Issa Rae. Before I dive into it, I realized I haven’t been to the movies since December, when I saw “Mary Poppins Returns”!

I definitely have to be in the mood to see a movie, and I guess there just hasn’t been a movie out that I really wanted to see. But, I really was looking forward to seeing “Little”, mostly because I am a huge fan of Issa Rae, but the story sounded fun, too.

It’s a modern-day body swap… with a great soundtrack. 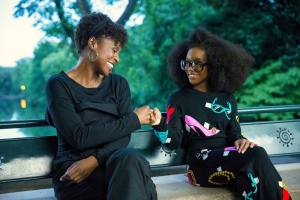 Jordan (played by Marsai Martin and Regina Hall) is an intense, strict, demanding, and downright rude boss — she owns a tech company — and is determined to succeed no matter who she hurts along the way.

During a rant with a breakfast truck in her company’s parking lot, a young girl wishes Jordan were little so she could remember what it was like to be a child full of imagination and without judgment.

The next morning, Jordan wakes up as a middle schooler again, and must rely on her assistant, April (played by Issa Rae) to help her grow up again, but navigate middle school AND running a company at the same time.

The fashion was one of my favorite parts. 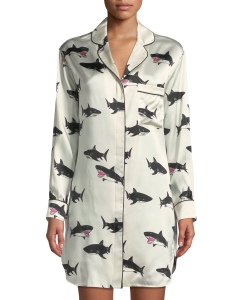 For starters, I thought this movie was really funny — I laughed a lot. There were several good one-liners, but also some scenes that I really enjoyed.

When Jordan wakes up young, obviously none of her designer clothes fit, so April buys her some clothes at Target. She ends up wearing some green gardening clogs, some overalls that are too short, and yet, still carries her Birkin bag to middle school. Once her new classmates start putting colored straws in her hair, I could not contain the giggles.

Minus the clogs and overalls, the fashion in this movie was so cool to see — honestly, I liked the outfits Jordan wore once she bought things that fit. She wore a colorful striped all-sequin jacket in one scene, a pink plaid suit with oversized pink buttons in another scene, a silky white nightshirt printed with sharks, and a black two-piece set that had colorful accessories printed all over it.

An article in “Vulture” outlines how the movie’s costume designer, Danielle Hollowell, came up with several of the looks in the film. In another article in “Vanity Fair” the same designer discusses where she draws inspiration from, which is pretty cool.

The week before I saw the movie, Marsai Martin was a guest on “The Daily Show”. I admit I don’t watch “Blackish”, so I’d never seen or heard of Martin before, but I was instantly impressed. She seems wise beyond her years, and her career is very inspiring given how much she’s accomplished at such a young age.

I feel like I’ve been in a bit of a creative slump lately, so I’m really glad this movie came out — I have always been inspired by movies: the writing, the sets, the actors and actresses.

Plus, going to the movies is fun! I let myself cheat on my diet and I got a cherry coke and popcorn 🙂 On top of that, I saw some previews for other movies I want to see, so hopefully it won’t be another four months before I’m back at the theatre!

I’d definitely recommend seeing “Little”, especially if you’re a fan of these types of movies — “Freaky Friday”, “Big” — or if you want to see the fashion with a few laughs! For more movie recommendations, be sure to subscribe to the blog (look to the right) and follow me on Instagram @Orangejulius7 – where I share more of my daily life. Need help with your blog? I can help with all of your digital marketing efforts – just let me know!

Blanche LOVES ice cream on a stick 🍦Her favorite flavors are toffee & cookies n’ cream 😋 As much as I try to hide my treats on a stick, she KNOWS when I open the freezer! I’m taking this as the first sign of summer! * Please note that I check all the ingredients to make sure it’s ok for her to have a few licks 😘 #Blanche #sharingiscaring #atx #catlady #frozenbanana #veganicecream
Yesterday was my last day as a member at Dance Austin Studio. When I moved to Austin in 2015, I was so excited to start dancing again after a break for 10+ years 😎 I danced in elementary (jazz), made the pom squad in middle school, & was captain of the high school dance team — where my Pepsteppers at?! 😆 Dance has been such a positive form of creative expression for me over the years & it’s served as an escape when I needed it most: when my parents divorced and when my dad passed away 💔 I met so many amazing friends at DAS and for that, I’ll be forever grateful. It also secretly fulfilled a dream I’ve had since I was a kid — to dance in front of hundreds of people and really just put it all out there! 👟 In recent years though, dance has boiled up some of my traumas from the past regarding sexual abuse and assault. I won’t let my love for dance be taken from me, but I need time to heal the wounds from my past that have affected the way I feel inside my skin. Don’t worry, dance parties in the kitchen are still a thing! I’m excited to check out some other classes from former DAS instructors I love so much — you all welcomed me and never judged me. Thanks for the experience of a lifetime! 👗 #dance #atx #keepaustindancing #dancer #newchapter #danceface
“I have to show up — although it would be so easy not to. Some days, I’m done with it all. I don’t want to count my steps. I don’t want to acknowledge what’s worse today, or what will inevitably get worse down the road. It’s exhausting to parse out what is Parkinson’s and what is attributable to other factors. Some things I can’t do because I’m fifty-eight. Is that old age? It was when I was twenty-one, which feels like five minutes ago.” — @realmikejfox
I’m slowly starting to cleanup my patio from the rough winter 😒 The good news is, nearly ALL of my plants survived and most of them are growing! 🐛 I hung these solar string lights last week and I get so much joy just seeing them when I’m in my kitchen. Looking forward to many nights out here soon 😎 #patio #aptlife #atx #atxspring #solarlightsoutdoor #cactus #tejas
I started this week like so many others — with hope that I’d find a gig to help pay my bills. The pandemic cut my monthly income by 80-90% and it’s been an entire year of ups and downs 😫 But I’m ending the week with 3 new gigs. It’s not pre-pandemic cash, but it means I get to have a taste of normalcy, that I get to stay in my apartment, that I get to treat myself 🌟 I know this isn’t over. But I do know that self-talk, manifestations, dreaming, hoping... it’s how I got out of bed every day. Here’s to yet another chapter. Let’s see how this goes! 💖 #manifest #create #dream #thebitterlemon #writer #freelancewriter #armstack #newjob #writingjobs
I got my first pair of non-prescription blue-light blocking glasses from @eyebuydirect 🤓 I’ve purchased 5 pair of glasses from them (prescription, sunglasses) over the years & am sharing it on Thebitterlemon.com today 👩🏻‍💻 I’ve had them for 2 weeks and wear them all the time (I accidentally ran an errand with them yesterday) 👓 Do you wear blue-light blockers? // Style: “Perry” in coral #thebitterlemon #linkinbio #eyebuydirect #bluelightglasses #bluelightblockingglasses #atx #selfie #glassesgirl #glassesfashion
I didn’t think I’d be so emotional seeing and holding this book, but I am 💙 It’s the 5th book I’ve written but my first try at long-form fiction. Not only do I love this story, these characters, this town in the pages, but I learned so much writing this:
Grabbed my Easter candy & hit the road in search of Bluebonnets! 🕵️ Found a few, but I still have more spots to visit this month — they are so pretty 🦋#texasbluebonnets #bluebonnetseason #atx #bluebonnetfield #spring #signsofspring
I got my second dose of the COVID-19 vaccine last week & am counting down the days to freedom 💉 I’m grateful for every person that had a part in creating these vaccines to bring us closer to better days: doctors, scientists, lab workers, researchers, trial participants, everyone 🦠 I did have some gnarly side effects & I’m sharing it all + tips for signing up to get a vaccine on Thebitterlemon.com today 🔬 PS. My mask is from @studiomucci & it’s my favorite one! 💖 #vaxxed💉 #vaccine #vaccinated #atx #covidvacccine #sciencewins
Feeling a bit brighter now that I’ve hung my lemon + magnolia leaf wreath! 🍋 I’ve also updated my Patio Playlist #linkinstory & I’m loving the new bops 🌼 I’m manifesting all sorts of fresh starts this season! #texas #atx #texasspring #diywreath #lemonwreath #springdecor #homedecor #springwreath
Congratulations, Stephanie & Kris! 🤍👰🏻🤵🏻 #zoomwedding #brideandgroom #forever
What a year it’s been 🦠 Some days, it feels like 10 years have gone by and my thoughts of life without masks and social distancing are fuzzy, but then I’ll get a clear memory of a long plane ride, a bowl of ramen at a crowded counter in NYC, or a John Mayer concert and I remember the joys of life that I miss so much 💙 I’m sharing an honest account of my last year in quarantine: the money I lost, what I ate, anxieties, things I did for fun, and how I’ve dealt with the struggle of it all — it’s on Thebitterlemon.com today (strap in, it’s a long one) ☠️ Here’s to hoping the next year brings back all the things we’ve missed #linkinbio #thebitterlemon #pandemic #quarantine #quarantinelife #ayearinquarantine #memories #covidlife