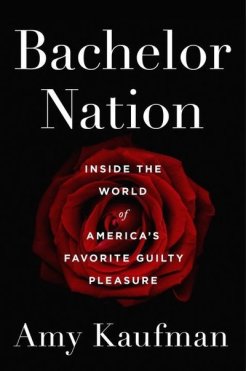 I’m heading to the doctor this morning for my annual checkup and blood test. If you’ve been reading for awhile, you know that last year, I (finally) faced my fears and got my blood tested for all sorts of things… everything turned out fine, so now I am happy to have a comparison and see how things are going. Plus, I’m really not scared! But, I’m still going to treat myself to a fancy pressed juice afterward.

But, wow have I got a T-R-E-A-T for you guys! It’s the latest read from Blanche’s Book Club and it’s juicy: “Bachelor Nation: Inside the World of America’s Favorite Guilty Pleasure” by Amy Kaufman. Here’s the description from Amazon.com:

For fifteen years and thirty-five seasons, the Bachelor franchise has been a mainstay in American TV viewers’ lives. Since it premiered in 2002, the show’s popularity and relevance has only grown–more than eight million viewers tuned in to see the conclusion of the most recent season of The Bachelor.

The iconic reality television show’s reach and influence into the cultural zeitgeist is undeniable. Bestselling writers and famous actors live tweet about it. Die-hard fans–dubbed “Bachelor Nation”–come together every week during each season to participate in fantasy leagues and viewing parties.

Bachelor Nation is the first behind-the-scenes, unauthorized look into the reality television phenomenon. Los Angeles Times journalist Amy Kaufman is a proud member of Bachelor Nation and has a long history with the franchise–ABC even banned her from attending show events after her coverage of the program got a little too real for its liking. She has interviewed dozens of producers, contestants, and celebrity fans to give readers never-before-told details of the show’s inner workings: what it’s like to be trapped in the mansion “bubble”; dark, juicy tales of producer manipulation; and revelations about the alcohol-fueled debauchery that occurs long before the fantasy suite.

Kaufman also explores what our fascination means, culturally: what the show says about the way we view so-called ideal suitors, our subconscious yearning for fairy-tale romance, and how this enduring television show has shaped society’s feelings about love, marriage, and feminism by appealing to a marriage plot that’s as old as Jane Austen.

Okay, soo… I have watched so many freaking episodes of “The Bachelor” (I don’t really enjoy “The Bachelorette”), it’s not even funny. I used to really love it, and then I just kept getting so upset when they wouldn’t pick the woman I thought they should pick… so then I swore it off… and then I watched Arie’s (horrible) season… all of that to say that the addiction is real, but why?

How does a reality show filled with champagne and tea lights hold such power over us, and how has it affected our expectations of romance?

And that’s why I was so excited to read this book! While I enjoy Tweeting along with millions of others during the show, I am not really familiar with the inner circle known as Bachelor Nation. Amy Kaufman really got an inside look, as she used to write recaps of the show, professionally… that is, until she got a little snarky and The Bachelor franchise shut her out.

So she set out to write a book, and used her connections to get the inside scoop from camera men, producers, and contestants. It. Is. Good. Shit.

Now, I’m not naive, so much of what’s in the book wasn’t a total shock, but it was nice to get confirmation of what I’ve been thinking while watching the show.

Reading this book, you’ll get the scoop on how the show chooses contestants, what it’s like to be a contestant, how all of the dates are planned, how the limo/introductions are planned, who gets paid, details on wardrobe and hair/makeup, and info on the Bachelor Mansion, plus more.

There’s even lots of info about specific contestants, infamous hookups and moments on the show, and a complete list of every season and it’s winner.

This book is like a giant box of Godiva truffles and I loved every bite of it. The thing is, what are we supposed to do after we’re handed such rich information? It doesn’t make me want to pick up watching the show, but I do think we have to consider the type of world we live in where people are willing to sacrifice so much for a drip of fame, and possibly romance.

I’m recommending this book to anyone who has ever watched “The Bachelor” – even just one episode. The next book Blanche’s Book Club will be reading is “The Husband’s Secret” by Liane Moriarty.