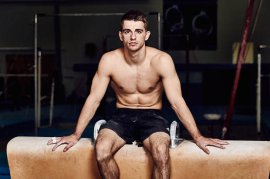 It’s official: the 2016 Olympic games are here and the opening ceremony airs tonight! I’m really excited to see how things turn out in Rio, and am looking forward to checking out some sports I’ve never paid much attention to before. But of course, I’ll be looking out for the attractive athletes while I’m at it, because… why not?

So, I’ve put together a list of some of the fine-looking fellas you can expect to see during the coming weeks at the Olympic games:

This will be Lochte’s 4th time at the Olympic games, after winning 11 medals (five gold, three silver, three bronze), and he will be competing in the men’s 200 individual medley. He is the current world record holder in the 200 and 400 individual medley. For more information on Lochte, visit his website.

Daley is a baby at just 22 years old, and this will be his third Olympics! He is known for his performance on the 10 metre platform, and is also a popular TV personality in the UK. He will be competing in the men’s 10 meter platform, as well as the men’s synchronized 10 meter platform. For more cute pics of this guy, follow him on Instagram.

Bennett will make his Olympic debut, and he’ll also be rocking the man bun, which I cannot resist. He is also the tallest rower on his team, coming in at 6’8″! He will be competing in the men’s coxed eight. For more on Paul Bennett, follow him on Twitter.

This will be Dalton’s second Olympic games, and he is known for his work on floor and vault. He’s pretty active on social media, using it to keep himself accountable for his athletic training. He is competing in the men’s individual all-around, pommel horse, vault, horizontal bar, parallel bars, team all-around, floor exercise, and rings. You can follow him on Twitter, Instagram, and SnapChat @Jake_Dalton.

In 2014, everyone was looking to Santana as the biggest hopeful coming out of Rio – that is, until it was looking as if his diabetes would get in the way of the competition. But his recovery was quick, and now he’s on a mission: “An Olympic medal is my goal and my biggest dream,” says the 20-year-old ahead of Rio 2016. “And there is only one colour that I want: gold, the most beautiful of the three.” Read the full article from Olympic.org here.

He’s Great Britain’s leading gymnast, and at 23, he’ll be going to the Olympics for the second time. He was also the first male British gymnast in the history of the sport to land a world title. He’ll be competing in men’s pommel horse, vault, horizontal bar, parallel bars, team all-around, floor exercise, and rings.

That’s right, you can catch top-notch Olympic coverage from yours truly, and probably Blanche, on SnapChat @OrangeJulius7 at various points over the course of the entire Olympic games. You can most definitely count me in on the opening ceremonies, which air TONIGHT, as well as anything swimming, diving, gymnastics, and I’m also hoping to catch rowing.

See what events are airing on TV here, and I hope you’ll follow along on SnapChat – it’s always a good time!