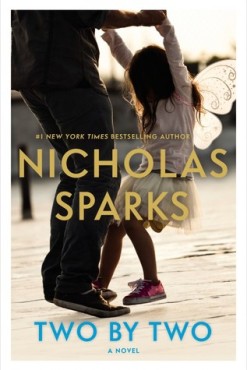 Happy St. Patrick’s Day! I almost ran out and bought a box of Lucky Charms last night so I could eat it today for good luck – but I know I legit just wanted anything sugary because sometimes you just have to treat yourself. I didn’t (I had egg whites and spinach instead), but the day isn’t over.

In other news, my latest read from Blanche’s Book Club is “Two by Two” by Nicholas Sparks! This book came out in October of last year, and I’ve pretty much been on a waiting list at the library ever since – that’s how much everyone loves Nicholas Sparks. Here’s the scoop:

#1 New York Times bestselling author Nicholas Sparks returns with an emotionally powerful story of unconditional love, its challenges, its risks and most of all, its rewards.

At 32, Russell Green has it all: a stunning wife, a lovable six year-old daughter, a successful career as an advertising executive and an expansive home in Charlotte. He is living the dream, and his marriage to the bewitching Vivian is the center of that. But underneath the shiny surface of this perfect existence, fault lines are beginning to appear…and no one is more surprised than Russ when he finds every aspect of the life he took for granted turned upside down. In a matter of months, Russ finds himself without a job or wife, caring for his young daughter while struggling to adapt to a new and baffling reality. Throwing himself into the wilderness of single parenting, Russ embarks on a journey at once terrifying and rewarding-one that will test his abilities and his emotional resources beyond anything he ever imagined.

…Sounds basically like every other Nicholas Sparks’ book, right? Kinda. I’m being serious when I say I love Nicholas Sparks. He’s obviously found a formula that works, as he has published what – 20 books – or so? And I also like that I pretty much know what I’m going to get when I settle in with one of his stories.

The chances are likely that it will be the story of a man and a woman, and will involve a third-party of some sort. The main characters will be too good to be true – nice, gorgeous, hard-working, etc. The third-party will be an asshole, a drunk, a gold digger, or an abusive prick. The story will be punctuated with homemade dinners, wine, and late nights, and yes, there will be a sad part.

“Two by Two” meets this mold to a degree. But I’ll be honest, at first, the lead male was really ticking me off. He was definitely not perfect, and he painted his wife out to be a whiny, superficial B. But why?!???!

I present to you, Exhibit A: an excerpt from a People magazine article, dated January 6, 2015:

There will be no storybook ending for Nicholas Sparks and his wife Cathy – the woman who inspired so many of the best-selling author’s novels.

The king of the love story, who has penned 17 romantic novels – nine of which, including The Notebook, have been made into movies – is splitting from his wife of 25 years.

So, bitter much?! Now that Sparks is single (or, no longer married), he’s going to paint the women in his books to be greedy whores!

In all honesty, this was probably the lengthiest book in Sparks’ collection, and I read 95% of it one day. So, it still makes for a laid-back, easy read that moves quickly. And yes, it would make a great movie.

The next book Blanche’s Book Club will be reading is “Settle for More” by Megyn Kelly (oohhh ahhhhh…). I hope you’ll read it with us!

And to all, I hope you have a happy and safe weekend. I’ll be… trying not to eat an entire box of Lucky Charms in a single sitting.